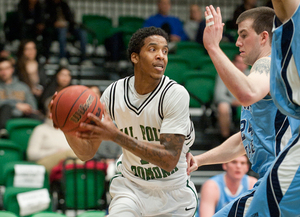 Down by as many as 14 points Friday, the men’s basketball team rallied to take a second-half lead against Humboldt State in the semifinal round of the California Collegiate Athletic Association Tournament.

The Jacks fought back to hold a three-point edge as the Broncos had the ball with 18.8 seconds to play. CPP couldn’t overcome the deficit in the end, falling by a 74-70 score.

Both the men’s and women’s teams must wait until Sunday evening to learn whether they will receive a berth into the NCAA Division II Basketball Championships. The pairings announcement will be aired live at www.ncaa.com beginning at 7 p.m.

The Broncos were led by Matt Rosser with 18 points and Deronn Scott with 5 rebounds. For complete game coverage, including game stats, visit Bronco Athletics.