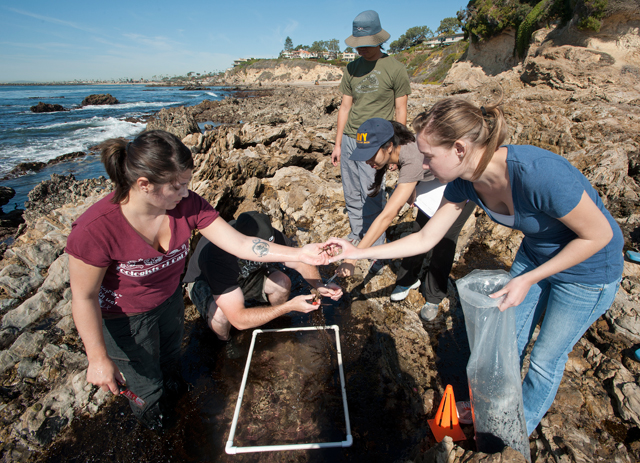 It¿s hard to not notice six people hovering around one tide pool. As you get closer, you find that the group is removing brown, thin seaweed, leaving a barren coastal wasteland of rock and water in an otherwise colorful area of Newport Beach.

Surrounded by a world of color ¿ purple sea urchins, green surfgrass and the pale blue water ¿ it seems as if the people pulling out the seaweed are doing more harm than good. But first impressions are wrong.

The fact is that the Southern California coastline is under siege by nonnative seaweeds that are threatening to alter the ecosystem. Biology Professor Jayson Smith, who has been investigating two of the most prevalent invasive species on the California coastline for 15 years, is conducting a two-year study to determine whether their removal is necessary and possible, and how much it would cost.

With an $87,000 grant from the city of Newport Beach, Smith will determine the impact of Sargassum muticum and Caulacanthus ustulatus on their marine ecosystems in Little Corona del Mar.

S. muticum is a species of brown algae native to Japan¿s coastline. It first appeared on California beaches more than 40 years ago and it attaches a holdfast, which is a root-like anchor, to a rock or shore bottom. The red alga C. ustulatus, also from Asia, was first identified in Southern California in 1999. This species spreads over a surface and can grow even from the smallest of plant fragments.

¿The main idea is to restore this particular location and to make a heavily impacted area more pristine,¿ says Smith, who is working with undergraduate and master¿s biology students on the study. ¿If the city could remove the nonnative species, they first need to see how the removal would impact the habitat in the area.¿

One of Smith¿s goals is to determine what might happen if the nonnative species are left unchecked. In the proposal, Smith cited the example of the brown seaweed in Washington waters creating shade that indirectly affected the number of sea urchins in the tide pools.

The same thing appears to be happening in the Newport Beach tide pools.

In a separate tide pool, Smith will remove a canopy of nonnative seaweed and replace it with a native surfgrass. Then, he will see whether removing the nonnative canopy has positive, negative or neutral effects.

Early studies on C. ustulatus, the red alga, shows it may increase native biodiversity, but Smith does not know why. It is also difficult to remove because it can reproduce through fragmentation. The team has used a blowtorch to remove it, but that process is also harmful to the surrounding habitat.

Smith¿s research is part of a larger, $2 million project in Newport Beach to restore ¿Areas of Biological Significance¿ and eliminate the pollutants, which could come from sewer drain runoff, houses and golf courses.

For the students, this is a time to learn how to conduct research in the field, while fulfilling a course requirement for graduation.

¿The first thing employers ask is what kind of experience you have,¿ says Hillary Grez, a senior zoology major, of how valuable this experience will be. ¿I¿m going to try to get into the California Department of Fish and Game after I graduate.¿

Smith is looking for more students to assist with his research. To learn more, email jaysonsmith@cpp.edu or call (909) 869-3625.