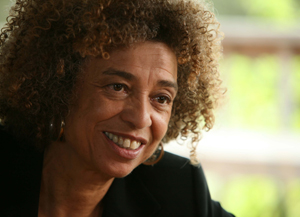 Activist, author and academic Angela Davis will speak at Cal Poly Pomona on Wednesday, April 11 about her research on prisons and incarceration as a strategy for addressing social problems. She will also discuss social activism and share her experiences with student leaders about effectively organizing and speaking out.

The lecture, which will be followed by a Q&A and a book signing, is free to members of the campus community and $10 for off-campus visitors. Tickets are available at the Office of Student Life & Cultural Centers in Building 26, room 124. Students, faculty and staff must pick up a ticket in person by showing their Bronco ID. Off-campus guests may reserve a seat by visiting http://dsa.cpp.edu/osl/angeladavis.asp.

The lecture and Q&A will be held from 2 to 4 p.m. in the Bronco Student Center’s Ursa Major Suite, with live streaming to an overflow room in Ursa Minor. Tickets are not required for the overflow room.

“As a black woman and someone who has been part of the civil rights movement, she has so much experience to bring,” says Jami Grosser, coordinator of the Pride Center and one of the event organizers. “This lecture is sort of a hybrid. We wanted her to speak to students around their activism and be inspired from previous generations. We also want to hear about her current research on certain communities that are more represented in prisons than in higher education.”

Through her activism and scholarship, Davis has been involved in social justice issues, emphasizing the importance of building communities of struggle for economic, racial, and gender equality. She has spent the last 15 years at UC Santa Cruz, where she is now professor emerita of history of consciousness, an interdisciplinary doctoral program, and professor of feminist studies.

Her recent writings and research highlight social problems associated with incarceration and generalized criminalization of those communities that are most affected by poverty and racial discrimination. She draws upon her own experiences in the early 1970s as a person who spent 18 months in jail and on trial after being placed on the FBI’s Ten Most Wanted List. She was found not guilty. She is working to complete a book on prisons and American history.

Davis works with Justice Now, which provides legal assistance to women in prison and engages in advocacy for the abolition of imprisonment as the dominant strategy for addressing social problems. Internationally, she is affiliated with Sisters Inside, a similar organization based in Queensland, Australia.

The event is sponsored by the Office of Student Life & Cultural Centers, Associated Students Incorporated, the Hugh O. La Bounty Endowed Chair of Interdisciplinary Applied Knowledge, and is funded in part by a grant from Target.

Doors to Ursa Major will open at 1:15 p.m. and close at 2 p.m., at which time all unclaimed tickets will be forfeited and seats released to other guests.

For detailed ticketing information, visit http://dsa.cpp.edu/osl/angeladavis.asp. Accommodation requests should be made by April 4 to jrgrosser@cpp.edu.