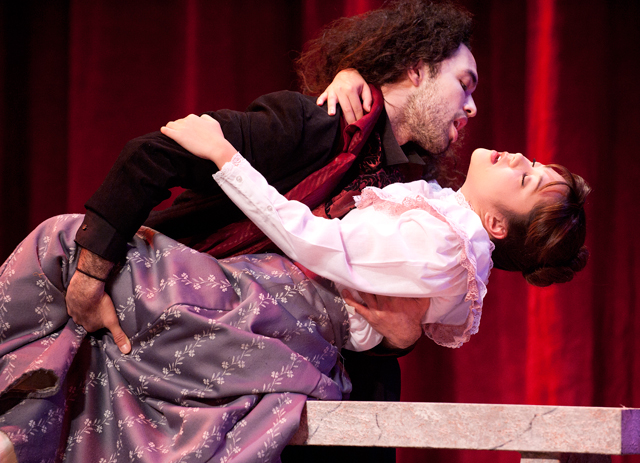 Simply the name of the most famous vampire conjures images of blood, fangs, crucifixes and mysterious lands, as well as feelings of suspense, horror and seduction.

Over the years, countless stage productions, movies and television shows have interpreted and re-interpreted the stories of Dracula and other vampires. While the original novel was rooted in Gothic tradition, recent adaptations have moved into the action, romance and even comedic genres.

Set in the late 19th century, the story focuses on four characters ¿ sisters Mina and Lucy Westerman, Mina¿s fiancé Jonathan Harker, and Dr. Arthur Seward ¿ who meet Dracula at various points and whose lives are transformed by the encounters. The script was adapted by Scottish playwright Liz Lochhead from Bram Stoker¿s novel.

Director and theatre Professor Bernardo Solano says the play¿s strength is in telling the characters¿ stories and their relationships with one another. 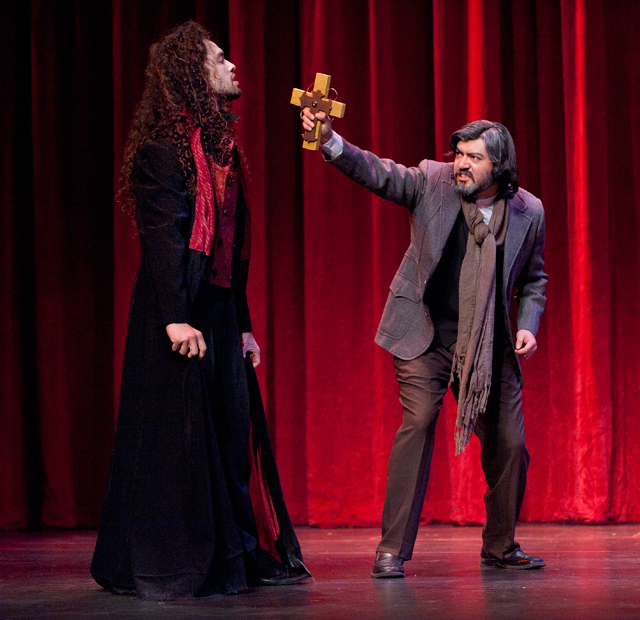 ¿It¿s not a flashy show. It primarily relies on the actors¿ performances,¿ Solano says. ¿We’re also trying to bring out the sensuality that¿s called for in the script. After all, that¿s one of the main elements that has attracted millions to the vampire mythology.¿

Juan de la Cruz, who plays Harker, says he¿s been challenged by Solano to portray a real transformation that contrasts his life before and after meeting Dracula. The change is both physical and mental, he says.

With the play¿s emphasis on character development, students are working to keep the performances honest and realistic ¿ or as realistic as possible when vampires are involved. The intrinsic supernatural elements build a suspenseful edge, but the characters keep it from veering off into the creepy or sensational.

¿We¿re trying to be as realistic as possible, not too melodramatic or too campy ¿ or like ¿Twilight,¿¿ says Kierson Tanopo, who plays Lucy Westerman. ¿We¿re not trying to put on a show, but we¿re trying to tell a story.¿

¿There still suspense, but the style is elegant,¿ adds Vanessa Toyama, who plays Mina.

Tickets are $15 for general admission and $10 for students, faculty, staff and seniors. For more information about the show or to reserve tickets, call the box office at (909) 869-3800 or visit www.class.cpp.edu/th/reservations.html.