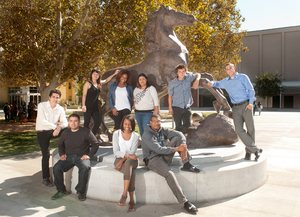 The Renaissance Scholars program is celebrating 10 years of providing much-needed stability, support and services for former foster youth to help ensure their success in college and in life.

College can be a daunting experience for anyone, but for students who lack the emotional and financial support of a loving family, it can be overwhelming.

“It’s very tough to make the transition to college when you don’t have parents or family members who can be there when you want to share your successes or need help with challenges such as unforeseen medical expenses, summer housing or sometimes food,” says Sara Gamez, coordinator of the Renaissance Scholars program.

She should know. Gamez was one of those students. She was feeling lost and considering dropping out when she joined the inaugural group of Renaissance Scholars in 2002. With the program’s support, she was among its first graduates in 2004. Subsequently, she earned her master’s degree in educational counseling and took the reins of the program three years ago.

“I feel so blessed to have the privilege to work with such an amazing and resilient group of students,” Gamez says. “We watch them grow and blossom into successful men and women who have beaten the odds and are changing their lives.”

Gamez, along with a Renaissance Scholars educational counselor and student interns, reaches out to local high schools and recruits former foster youth to apply to Cal Poly Pomona and to participate in the program. She and her staff work side by side with the students from the time they join the program until they walk down the aisle at graduation.

Koji Uesugi, who assisted founding director James Norfleet in developing the program and is now associate dean of special-funded programs at Norco College, says:
“These are extraordinary students who, in many cases, have gone through very traumatic situations and, despite that, have persevered and persisted and made their way to college. But getting through college is difficult. Support systems can make all the difference in the world in terms of their success.”

The support system they developed required commitment from multiple departments on campus. Students needed a physical space where they felt safe and a supportive staff familiar with their unique needs. Mandatory meetings with academic advisors and counseling were key components, along with guaranteed, year-round housing and access to meals during winter, spring and summer breaks. For some Renaissance Scholars, the residence halls are the closest thing they have to a permanent home.

“We even helped them get their driver’s license,” Uesugi says.

After getting buy-in from a broad range of departments and approval from the university president, Cal Poly Pomona secured a three-year grant from the Stuart Foundation as seed money. Since then, the university has committed to sustain the Renaissance Scholars program through a variety of state and grant funding, as well as generous donors whose contributions augment services and scholarships.

When the program started, only Cal State Fullerton had a similar service, Guardian Scholars, dedicated to helping former foster youth succeed in college. The inaugural participants at Cal Poly Pomona were given the opportunity help name the program, and they decided on a name that reflected their abilities and belief that they truly belonged in college.

“Renaissance came up as both a symbol of renewal as well as a renaissance person who is multitalented and could do many things,” Uesugi says. “Students wanted a program name that more positively reflected who they were and what they aspired to be, and “Renaissance” best represented that.”

Today, many colleges and universities have initiated similar programs, which have proved to be successful. Nationally, the graduation rate for former foster youth is around 3 percent, according to the CSU Chancellor’s Office. Cal Poly Pomona’s Renaissance Scholars program has served 123 students in the past decade, and the graduation rate is more than 50 percent.

“We attribute the difference to the guidance, attention and overall support we have been able to provide to Renaissance Scholars for the past 10 years,” Gamez says.

Currently, the program serves a maximum of 50 students and provides a computer lab/study room and student lounge near the university bookstore. Monique Allard, executive director of student support and equity programs, says she would love to expand the program to serve all of the estimated 100 former foster youth on campus.

“Unfortunately, because we are currently at capacity, we may only be able to admit 10 or fewer new students to the program,” she says, noting students are selected based on a process that includes an application and personal interviews.

“We have been fortunate with donations and grants to offer a small amount of scholarships. But even with financial aid, each of our Renaissance Scholars still has an unmet need of $7,000 to $9,000 per year,” she says, referring to money needed to cover the cost of tuition fees, books and supplies, housing and food.

As seniors close in on graduation, Renaissance Scholars offers seminars focused on preparing them for life after college, including job interview tips, career skills and money management.

“We want to continue to strengthen our efforts to support students in becoming fully independent, educated professionals who will contribute to the community,” Allard says.

A Mentor to Other Foster Youths

Enrique Montiel, whose father died of cirrhosis when Enrique was 12, was motivated to do something with his life. He decided to become a social worker so he could assume custody of his younger brother and sister, who had been living in foster care since their mother’s death.

As a first-generation college student, Montiel didn’t know what to expect when he arrived at Cal Poly Pomona in 2002, but Renaissance Scholars helped him navigate the unfamiliar terrain and gave him a sense of belonging among other students with similar experiences.

“Emotionally, it made it easier for me,” he says. “We formed another family within Renaissance Scholars. It was not just about school; it was about family issues and about personal issues. That was a key in helping me succeed in college.”

The program has expanded and improved since Montiel was a student. Services now include low-cost or free dental and eye exams. And, a computer lab is a critical resource.

Montiel, who earned a bachelor’s degree in sociology in 2006, works in Los Angeles for Nuevo Amanecer Latino Children’s Services, the same foster care agency that placed him when he was a child.

His younger siblings came to live with him for about four years. His youngest brother, Ramiro, is currently a freshman at Cal Poly Pomona and a Renaissance Scholar.

Finding Strength in a Community

Melinda Leekin came to Cal Poly Pomona seeking a change in environment from her Bay Area home. What she found was a new family.

Leekin was recruited to join Renaissance Scholars in her freshman year and was part of the group’s inaugural class in 2002.

“When they told me they were seeking students who had the same background as I did, it was a good feeling,” she says. “I wanted to join.”

Leekin says the tutoring assistance she received was especially helpful. And, on a personal level, she says the staff was always there when she needed to discuss issues involving school or other things.

“Just being a part of a community was really important to me,” she says. “The extra support system was really helpful. And we felt like a family, which was very helpful for me at the time.”

After graduating with a degree in e-business, Leekin started working full time as a brand manager for Lee Kum Kee, a food manufacturing company she had interned with in 2005.

She keeps in touch with other alumni and reconnects at various Renaissance Scholars events throughout the year.

When asked about the overall lesson she learned from the Renaissance Scholars program, Leekin says: “We’re no different from other students who may have had the so-called ‘normal’ college experience. We’re capable of achieving what we want to achieve with school, our personal life and our professional life. There are no limits to what we do as long as we put our hearts into it. We’re able to be resilient individuals and do what we want to do with life.”

From Struggles to Triumph

Cornelius “Cory” Raymond struggled his first year at Cal Poly Pomona even though he had been an honor roll student in high school. Raymond, who had lived in foster care since he was 8, got caught up in the social aspects of living in the residence halls: hanging out, playing pool and basically goofing off. He didn’t have anyone to answer to but himself.

In his sophomore year, Raymond found the support and structure he needed in Renaissance Scholars.

One of his advisors, Maria Ruiz, met with him every two weeks to talk about what he really wanted to do and what he was passionate about. She reviewed his grades and kept him focused. Raymond took advantage of the various workshops and retreats available.

“Basically, I didn’t want to fail in school. I wanted to stay involved. It made me want to be the best college student I could be,” he says.

Raymond graduated in 2006 with a degree in sociology. He enjoys working as a substitute teacher and is preparing to earn a credential with the goal of teaching U.S. history in high school and coaching basketball.

Raymond is grateful to Renaissance Scholars for the support and encouragement he received.

“A lot of us went through stuff normal kids don’t have to go through,” he says. “Having peers who actually struggled and succeeded and went to college gave me that same motivation. If they can do it, I can do it too.”