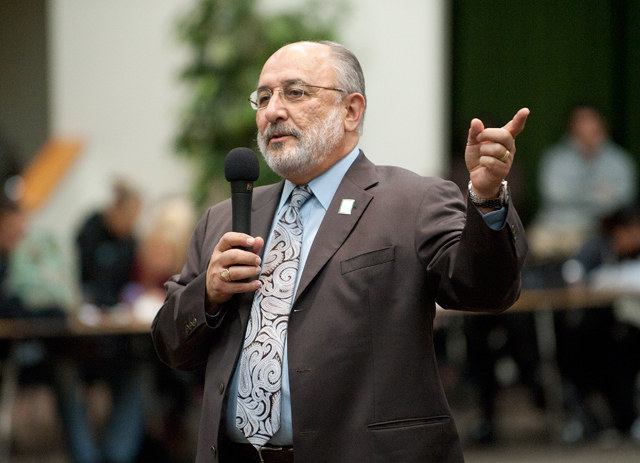 The annual evening rendition of Pizza with the Presidents covered well over a dozen topics, ranging from sustainability to food choices on campus to the safety of trucks making nighttime deliveries, but one topic cropped up repeatedly as it has at the past several quarterly get-togethers: access to education and its cost.

In a fast-moving session Feb. 7 that ran just over an hour and featured the first use of social media for participants who could not attend in person, university President Michael Ortiz and ASI President Johnathan Jianu agreed that lawmakers in Sacramento need to be made aware of the damage they are doing to higher education by continuing to cut funding.

¿We are laying out a plan for student advocacy,¿ Jianu told the more than 200 students and staff who filled the seats and lined the walls in the Bronco Student Center. ¿We need your support.¿

Ortiz pointed out that about 36,000 members of the CSU community ¿ students, faculty and staff ¿ contacted Gov. Jerry Brown¿s office during the previous budget deliberations, but he said that figure is a small fraction of the more than 500,000 students, 40,000 faculty and 50,000 staff who are stakeholders in a process that has resulted in higher tuition and, in many cases, reduced access to classes. 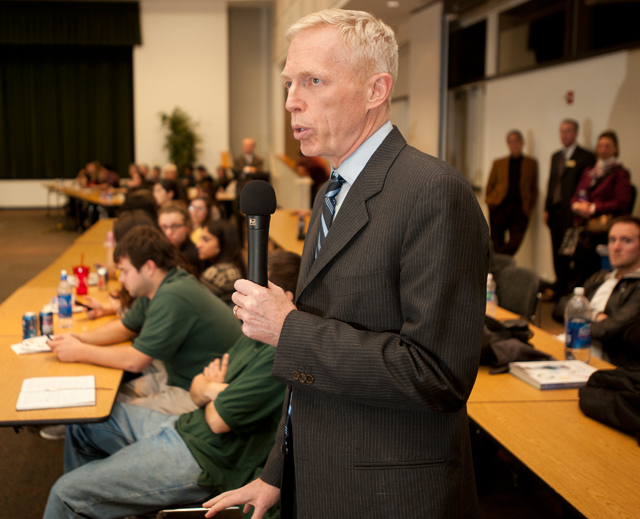 ¿Everything we do is focused on keeping this a quality institution,¿ Ortiz said. ¿We¿ve had no layoffs, and average class loads remain at more than 13 units,¿ but the challenges grow with every budget cut. Cal Poly Pomona has seen its operating budget pared by $43.5 million in the past two years.

The first of several questions from Twitter focused on dining options, including bringing other restaurants to campus.

Paul Storey, executive director of the Cal Poly Pomona Foundation, which oversees food service operations, said students have been surveyed on what they would like, and their opinions will be taken into account, but he pointed out that In-N-Out Burger and Chipotle, consistently popular choices, have indicated that they do not intend to come to any campus at least for the foreseeable future. ¿It¿s not a part of their plans,¿ he said.

Parking, a hot topic in previous years at Pizza with the Presidents, reappeared among the questions, with a student observing that it was difficult to find a space in the afternoon.

Mike Biagi, director of parking & transportation services, said the F lots are frequently at capacity, but the K, J and E lots on the perimeter of campus generally have plenty of available spots. He encouraged the campus community to consider ridesharing and other alternatives.

¿There are a lot of options to get to campus besides driving your car,¿ he said, adding that reducing vehicles on campus is part of the overall strategy to reach carbon neutrality by 2030.

Sustainability is a major university initiative, and it was a recurring topic. Walter Marquez, director of facilities administrative & energy services, said more electrical vehicles are joining the campus fleet, and he addressed an overlooked source of greenhouse gases: farm animals. ¿We need a large enough herd for instruction, but we don¿t need to be a cattle ranch,¿ he said. 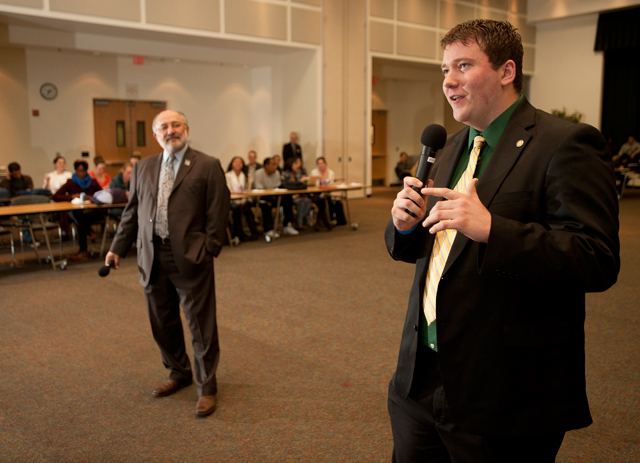 Jianu cited student-led sustainability efforts, including the installation of water-filtration dispensers in the BSC that have significantly reduced the number of plastic water bottles. He also said the new recreation center, scheduled to open in fall 2014, is being designed to achieve gold LEED certification.

Pizza with the Presidents concluded on a whimsical note, with a student asking the presidents, ¿Do you like cereal?¿

Jianu said he developed a taste for a concoction of Cocoa Puffs and Fruit Loops while living in the dorms. Ortiz deadpanned that ¿I love cereal if it has a big, red K on the box,¿ an allusion to Kellogg, whose foundation is a major benefactor to the university.

To read the live tweets from Pizza with the Presidents, download a PDF of the transcript. Video rebroadcasts of the Q&A will be aired at different times on campus channel 33 or streamed online over the next several days.