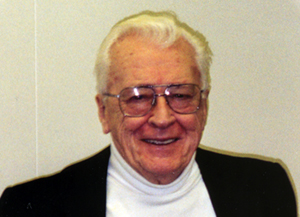 English Professor Emeritus John Frederick Fulbeck, a prolific poet who joined Cal Poly Pomona when it was still part of San Luis Obispo, has died at 95.

After serving in the Navy during World War II, Fulbeck enrolled at USC. He earned his bachelor¿s degree in 1951 and a doctoral degree in comparative literature in 1960.

He began teaching at Cal Poly Pomona in 1958 in the English department (now known as the Department of English & Foreign Languages), which offered a wide range of courses in English, speech, drama, law and music.

Fulbeck filled in as department chair on three occasions, though he preferred working in the classroom. He enjoyed teaching courses on classical Western literature, the Bible and Greek literature. He also helped to establish the campus¿ first study of Shakespeare, which in the course catalogue was titled ¿Special Problems for Advanced Undergraduates¿ in order to match the campus¿ utilitarian environment at the time. Fulbeck retired from full-time service in 1983.

A prolific poet, Fulbeck found his works frequently published in periodicals and anthologies. He was a past president of the California State Poetry Society and a frequent editor of the California Quarterly, the state¿s poetry magazine. His poem ¿Challengers¿ was read from the space shuttle Challenger in 1985 during flight.

¿Dr. Fulbeck was a remarkable teacher, a nationally recognized poet, a leader of the faculty in the English department and the university. He was a close friend of mine. He will be missed,¿ says Hugh La Bounty, president emeritus of Cal Poly Pomona.

Fulbeck, who died Dec. 25, is survived by his wife, Mary; three children, Josie, David and Kip; and two grandsons.