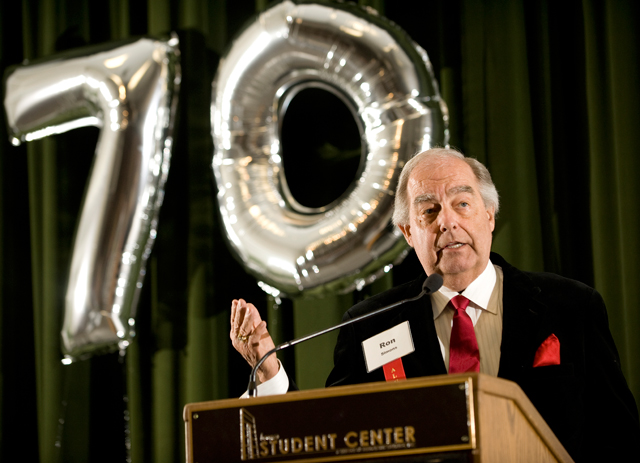 Ron Simons, whose six-decade affiliation with the university as a student and administrator has rightfully earned him the nickname ¿Mr. Cal Poly,¿ will soon have a new title.

Cal Poly Pomona will award him an honorary degree at commencement this spring in recognition of his contributions to the university, which include invigorating the Rose Float program and establishing the alumni association.

¿Ron Simons is one of this university¿s treasures,¿ says President Michael Ortiz. ¿He served all five of Cal Poly Pomona¿s presidents in one capacity or another and was instrumental in the university developing its own identity after it formally split off from San Luis Obispo. And perhaps most important of all, he has been a wonderful colleague, mentor and friend for innumerable members of the campus community throughout the years.¿

Bob Suzuki, who preceded Ortiz as president, says Simons has played an integral role in improving the quality of life on campus.

¿He brought in millions of dollars in contributions and has been a major contributor to the advancement of this university,¿ Suzuki says.

Take a quick look at Simons¿ office in the CLA building, and you will quickly see what he is perhaps most recognized for: his support of the rose float program. The Cal Poly Universities have participated in the annual parade every year since 1948, and Simons has left an imprint on more than 50. A photo in his office shows a Cal Poly Pomona student on the 1962 float, ¿Man on the Moon.¿ It is Simons, dressed as an astronaut. In subsequent decades, he has encouraged, organized, cajoled and fund-raised to ensure that student volunteers have the experience of a lifetime.

Simons was perhaps the most surprised at the honor.

¿I was shocked. I guess they ran out of people to consider,¿ he says with typical self-effacing humor. ¿I truly never saw it coming.¿ 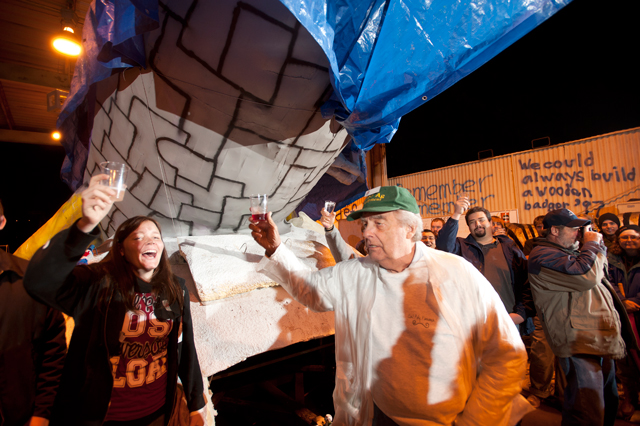 Warren Baker, president emeritus at Cal Poly San Luis Obispo, says it is hard to overstate how important Simons¿ role has been in sustaining and developing the rose float tradition. ¿He has been the indispensable ambassador from the two campuses to the Tournament of Roses organization, overcoming occasional skepticism about the ability of university students to implement such an ambitious project.¿

Ask Simons, and he will direct the credit elsewhere ¿ typically to students or rose float alumni.

¿Ron is truly one of a kind,¿ Ortiz says.

(Top photo: Ron Simons speaks at the College of Agriculture’s 70th anniversary celebration March 21, 2009. Middle photo: Simons is the Man on the Moon in the 1962 Rose Parade. Bottom photo: Simons leads a toast as 2011 rose float, “Galactic Expedition,” begins its journey to Pasadena on Dec. 19, 2010.)