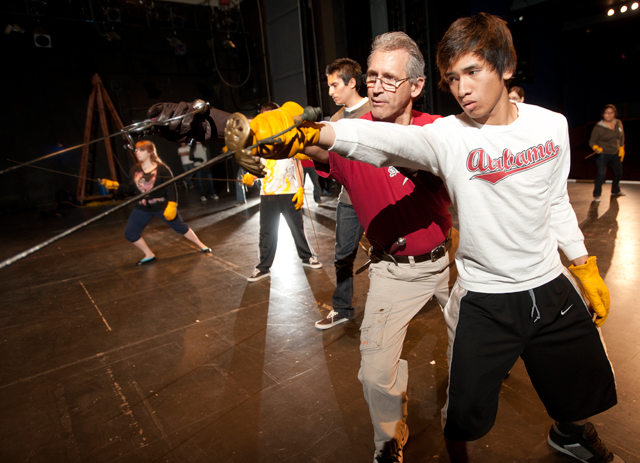 The Department of Theatre & New Dance will host its second annual Film Symposium on Friday and Saturday, Jan. 20 and 21, with an emphasis on directing, screenwriting, production and casting. Film director Colin Campbell will show his 2011 feature, ¿Guido,¿ on Jan. 20 at 6:30 p.m. in the Music Recital Hall.

Most workshops are limited to registered participants, but some events are open to the public, including the film screening.

¿Guido¿ follows an Iraqi immigrant hit man who gets mixed up in a deal gone bad and is forced to transport a corpse across the country, with several Albanian assassins and the FBI on his trail. The film stars Alki David, Billy Zane, Armand Assante, Gary Busey and Lupe Ontiveros. Campbell, an Academy Award-nominated filmmaker, will answer questions following the screening.

¿The symposium is about celebrating the art of film and the many artistic aspects of filmmaking, film editing and screenwriting,¿ says theatre Professor Linda Bisesti. ¿It will also explore the audition process with casting directors from Los Angeles.¿

Other public events include a workshop about stage combat fighting on Jan. 20, from 2 to 5 p.m., in the University Theatre. Space is limited.

On Jan. 21 at 10 a.m., casting director Stephen Snyder will teach students about auditioning for television and film. Snyder has done casting for film, music videos, commercials and plays. The workshop is open to the public and will be in the Studio Theatre (Building 25, room 110).

The event is supported by the Intellection Stimulus Program in the College of Letters, Arts & Social Sciences and the Provost¿s Office. For more information, call (909) 869-3900.