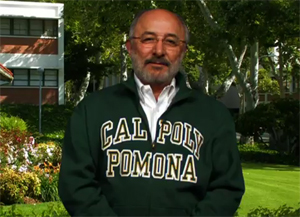 Cal Poly Pomona consistently produces some of the nation’s best-prepared graduates, according to a special report by Kiplinger, a finance and investment magazine. In his weekly video address, President Ortiz highlighted the university’s 91st ranking in the list of the 100 top public colleges and universities that blend excellence and affordability.

“This success story is a direct reflection of the efforts of our faculty and staff, men and women who consistently provide our students with a premier educational experience,” Ortiz says.

The president’s weekly video update includes information about Gov. Jerry Brown’s proposed budget for 2012-13. The CSU will receive the same budget as this year, which includes $750 million in cuts over the past seven months. The governor has also proposed a new series of trigger cuts that would go into effect if the tax initiatives do not pass the ballot next November.

Other updates include the CSU Symposium on University Teaching at Cal Poly Pomona in April, the Kellogg Distinguished Public Lecture Series event on Jan. 26, the theatre department’s second annual Film Symposium, and a screening of the film “A Soldier’s Story” on Jan. 17.

The video closes with a final look at the 2012 rose float, which includes photos and video of the creation, development and debut of “To the Rescue!”