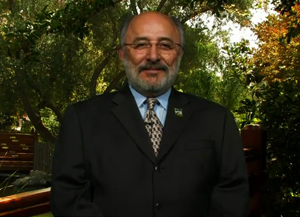 President Ortiz congratulates Ron Simons, also known as Mr. Cal Poly Pomona, who will receive an honorary doctorate in June. The degree honors Simons’ legacy of service and achievement to the university.

“Simply put, his life has been dedicated to this university. From the day he walked onto the campus in 1960, to receiving two bachelor¿s degrees in 1964 and 1969, to a career of over three decades of university service, his contributions are widespread and significant,” Ortiz says. “And he still plays a role in campus life, working in advancement in support of the comprehensive campaign.”

The Safety Alert system can contact people through phone, email and text message, but there are some real problems in reaching people on campus during normal business honors. A task force has been reviewing proposals from companies that specialize in emergency communication. After the last company presentation in early February, the task force will start considering the next step.

To read the video message, download a PDF of the transcript.