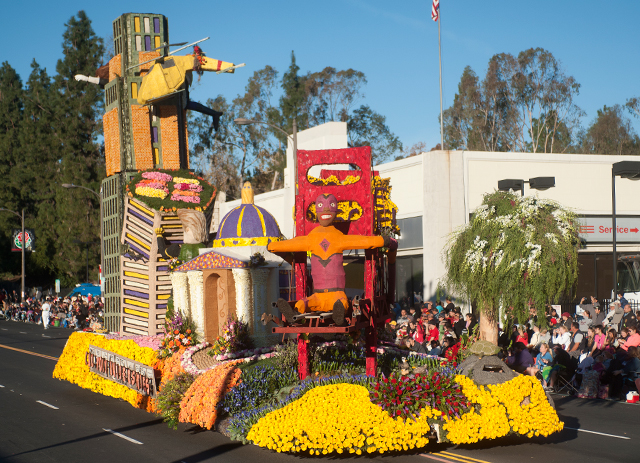 The Cal Poly Universities are going for their fourth consecutive Viewers’ Choice Award, but they need your help. Vote for ¿To the Rescue¿ by casting an online ballot at the KTLA-Channel 5 website at www.ktla.com/entertainment/roseparade/ starting at 10 a.m., immediately after the parade concludes. Click on the Favorite Float link www.ktla.com/entertainment/roseparade/floatvoting/ and follow the instructions.

¿To the Rescue,¿ which depicts three superheroes saving a city from destruction, is one of the few classified as self-built and is produced entirely by students and alumni of Cal Poly Pomona and Cal Poly San Luis Obispo. The universities have participated in the parade every year since 1949 and have been a trailblazer for innovation, being among the first to employ computer-controlled animation and hydraulic systems.

¿To the Rescue¿ turned onto Colorado Boulevard only minutes after the start of the 123rd annual Tournament of Roses and drew an enthusiastic response, especially when it passed the Cal Poly cheering section.

¿It¿s always a thrill to watch the float pass by,¿ says university President Michael Ortiz. ¿The months of hard work and dedication that the student volunteers put in is fully rewarded at the parade.¿