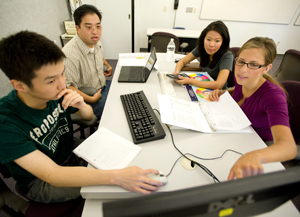 Cal Poly Pomona has been named one of the best values in higher education, ranking 91st in Kiplinger¿s annual rankings of the top 100 public colleges and universities that blend excellence and affordability.

¿Given these hard times in higher ed, the word value takes on special resonance,¿ say the editors at Kiplinger¿s Personal Finance magazine in explaining their rankings system, which includes graduation rates, cost and student debt loads. The top 100 were drawn from a pool of more than 500 colleges and universities.

University President Michael Ortiz credits the faculty and staff for the ranking.

¿This recognition is a direct reflection of our faculty and staff, who are constantly providing our students with a premier educational experience,¿ Ortiz says. ¿Budget cuts have impacted every aspect of campus life, including our ability to appropriately reward these people. But these individuals have risen to the challenge so our students remain among the best prepared graduates.¿

Three other CSUs made Kiplinger¿s list: San Diego State (77th), Cal Poly San Luis Obispo (83rd) and Cal State Long Beach (98th). Berkeley, rated seventh, was the highest ranked of eight UCs that made the top 100. The University of North Carolina was ranked first this year, followed by the University of Florida and the University of Virginia.

(Photo: Students work on a project for a technology and operations management class on May 28, 2009.)