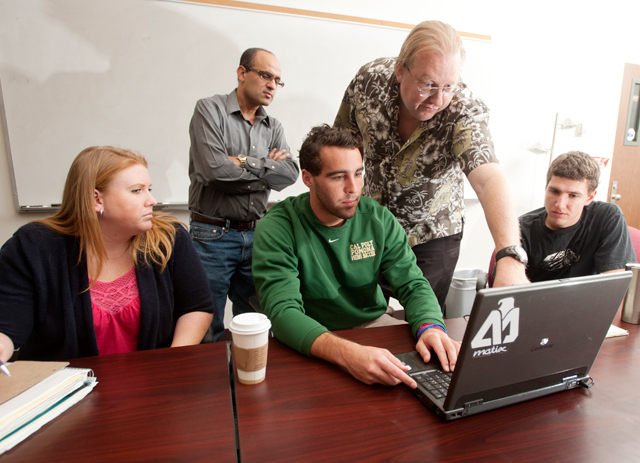 The collaborative project is based on the RMAX, a quarter-scale helicopter donated by Northrop Grumman Corp. The research involves sending an unmanned aerial vehicle (UAV) over a specified location, taking surveillance images and then relaying the data to an unmanned ground vehicle (UGV), which processes the images, identifies the location of simulated targets, and is autonomously routed to the target location to deliver a package. The Cal Poly Pomona team will develop the ground system, while Cal Poly San Luis Obispo will be responsible for the RMAX helicopter¿s flight operations.

¿The idea is for both teams to develop their own part of the project while working with the other to make sure everything comes together,¿ says Subodh Bhandari, an associate professor in the aerospace engineering department at Cal Poly Pomona. ¿Both of our universities are training the next generation of engineers, and this real-world research will go a long way toward ensuring that they have the necessary skills. Collaboration is critical.¿

About 30 students and professors will work on the project, 15 from each university from several engineering disciplines and computer science. Though most will focus on their portion of the research, some will work in cross-disciplinary teams.

The project stems from a joint proposal the universities made to Northrop Grumman earlier last fall. The vehicle is designed to fly autonomously, meaning it can fly preprogrammed routes by itself without intervention by a pilot.

¿Developing the inertial navigation system for a helicopter requires contributions from numerous engineering disciplines,¿ noted Eric Mehiel, chair of the aerospace engineering department at Cal Poly San Luis Obispo, who is directing the flight project in partnership with electrical engineering Professor Lynne Slivovsky. ¿With Northrop Grumman¿s support, students from both universities will gain firsthand knowledge of what is required to work on a multidisciplinary team. In fact, this project is a great example of learn by doing because so many of the technical problems require the students to acquire knowledge that is not normally part of a traditional class.¿

Northrop Grumman sees many advantages to supporting such a project.

¿We are very enthusiastic about this project because it will give the students the real-life experience of having two teams collaborate over distance while working with technologies that are of significant interest to our business,¿ says Charles Volk, vice president and chief technologist for Northrop Grumman¿s Navigation Systems Division. ¿A top priority at Northrop Grumman is improving education through programs that support students and enhance science, technology, engineering and math curricula ¿ STEM education ¿ and we believe this program does that.¿

UAV technology has numerous potential applications, both commercial and military. For example, a UAV could fly over a fire, gather data to determine its path and then direct countermeasures, or it could quickly venture to the epicenter of an earthquake to assess damage.

The project will culminate in a flight at the Cal Poly San Luis Obispo campus in May.