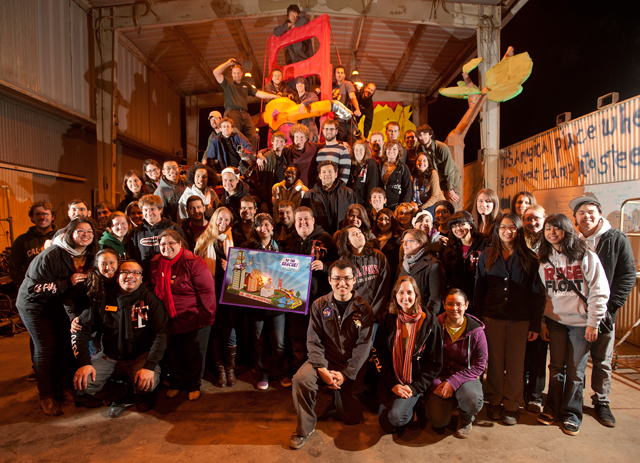 The Cal Poly Universities float moved ever so slowly on South Campus Drive. It was on its way to Pasadena, the culmination of nearly a year’s worth of work.

The nighttime Rose Float Appreciation & Float Move-Out celebration Dec. 19 brought together President Michael Ortiz, his wife Betty, and about 100 students and alumni from both universities to watch ¿To the Rescue¿ head to the Rose Bowl for Deco Week, when volunteers will adorn it with flowers, spices and seeds.

To an outside observer, the 55-foot-long welded structure bathed in yellow foam might have appeared ungainly, but to the crew of volunteers who labored for months on the float, it was a work of art.

¿It¿s always exciting to see something working for the first time,¿ says Kevin Bauer, a Rose Float construction assistant and Cal Poly Pomona student. ¿This float has been a challenge since the beginning. To see all of it working flawlessly ¿ it¿s all coming together.¿

Several members of the Tournament of Roses Construction Committee came to campus Dec. 17 with a lengthy checklist to ensure that ¿coming together¿ was correct. The annual T2 inspection covered everything from the float¿s animation to its maneuverability to its safety features ¿ and it passed with flying colors.

¿It¿s good to see that year after year the kids make something that is more challenging than the last,¿ says Steve Kin, a Cal Poly Pomona Rose Float alumnus whose participation dates to the 1960s. ¿It¿s a wonderful feeling, and the kids did most of the work themselves.¿

Dennis Firestone, president of KKW Trucking, has arranged for the past six years to have a member of his crew tow the float to Pasadena.

¿It¿s rewarding to be a part of the effort,¿ Firestone says. ¿Everyone is struggling with their budgets, and it¿s nice to be able to contribute. It makes you feel important and a part of something special.¿

The Rose Float Committee is seeking contributions and volunteers for Deco Week, which begins Dec. 27. Volunteers can go online to www.rosefloat.org/ and click on the Deco Sign Ups link at the top of the page.