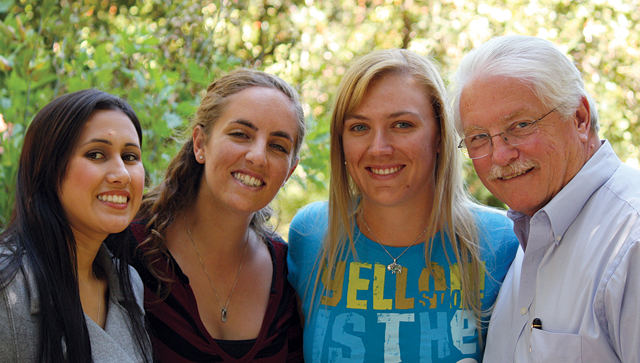 The Agribusiness Marketing Team won a $20,000 scholarship in the HSI Scholarship Competition sponsored by Sam¿s Club. The scholarship was awarded to the three-member team and faculty advisor for a proposal on marketing Sam¿s Club to Hispanics.

Food marketing and agribusiness lecturer Richard Mathias says the award came as no shock to him.

¿The students worked so hard on the project. They really deserve this,¿ Mathias says.

Juniors Kirren Dolan, Samantha Pearson and Brenda Trujillo, as well as Mathias will split the $20,000 prize. Mathias plans to use the money to buy new desks for the College of Agriculture building.

Trujillo, who was on the marketing team last year, says the due date was the biggest challenge.

¿It was due during the week of finals so we worked really hard to turn it in on time,¿ Trujillo says. ¿We were very organized. We stuck to our timelines and met frequently.¿

The marketing plan calls for ¿parent stores¿ to deliver fresh baked goods and meat cuts to ¿child stores¿ in the surrounding area. Based on market research, students recommended introducing a child care facility and new types of Hispanic foods to the stores.

The Agribusiness Marketing Team competed against teams from 238 colleges for the national award. The team also won an all-expenses-paid trip in November to the award presentation in Washington, D.C.