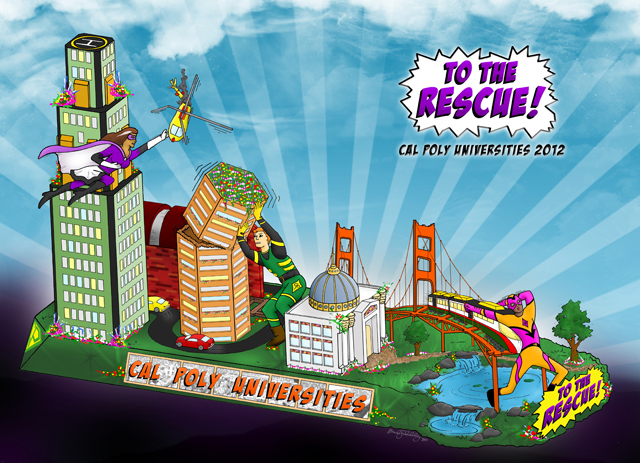 Superheroes will fly in and save the day on Monday, Jan. 2 when the Cal Poly Universities¿ 64th consecutive entry rolls down Colorado Boulevard at the 2012 Rose Parade.

But much work remains before ¿To the Rescue¿ is ready for its close-up. Throughout December, the Rose Float Committee will be working virtually around the clock.

¿It¿s getting busier and busier with each passing day,¿ says Justine Budisantoso, Rose Float Committee vice chair. ¿We are in the midst of float season. What this means is that construction is underway, the frame of the float is getting done, advertising and community involvement is being promoted through our marketing team, and the pieces are all coming together.¿

Tomorrow, Dec. 1 from 11:30 a.m. to 1 p.m., the Cal Poly Pomona community will be able to see the nearly finished version of the float when it is rolled out to the grassy area outside the Bronco Student Center for the annual Rose Day. The float will feature 25-foot-tall skyscrapers, moving cars on city streets, a train that runs the length of the float, and a pond and waterfall.

¿The build this year is more complicated than in some previous years,¿ says Robert Bauer, the construction chair. ¿More of our elements are integrated, so we¿ve had to build everything at once rather than in small elements what we can place together later.¿

When the float makes its way down Colorado Boulevard, viewers will see three superheroes saving a city from destruction.

¿Flying Girl will be saving a crashing helicopter, Strong Man is catching a collapsing building, and Elastic Man prevents a train from running off the tracks,¿ Bauer says.

After Rose Day, the team will work to get the design finished by Dec. 19, when the Rose Float lab hosts an open house, along with a ¿move-out celebration¿ for the float¿s 30-mile overnight trek to Pasadena.

Once the float arrives in Pasadena, students, alumni and volunteers from Cal Poly Pomona and San Luis Obispo will work around the clock from Dec. 26 to Jan. 1 to decorate the float, ¿preparing it for judging and its television debut to the world,¿ Budisantoso says.

The float committee is still seeking donations of food and meals to keep the volunteers fueled up for the task.