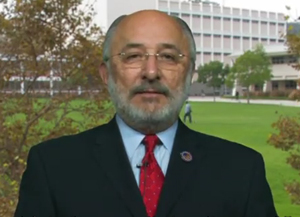 President Ortiz recaps development-related events this past weekend, including meetings with the Comprehensive Campaign Steering Committee and the National Development Council.

The campaign steering committee discussed the $150 million fundraising campaign, which is looking to raise the final $50 million over the next 20 months. The development council, which includes 30-plus business leaders, influential alumni and university friends, addressed some significant campus initiatives, such as cyber security; science, technology, engineering and math education; and Scolinos field.

Congratulations go out to men’s soccer player Luis Gonzalez, who was named the CCAA Most Valuable Offensive Player of the Year. Midfielder Juan Mejia was placed on the All-CCAA First Team. On the women’s team, Justine Barclay and Jennifer Rivera were named to the second-team All-CCAA, and freshman Christina Carriaga received the conference newcomer of the year recognition.

Finally, cross country athlete Tiffany Dinh placed sixth overall at the NCAA West Regionals this past weekend and she’ll get a second opportunity to compete at the NCAA Division II National Championships, scheduled for Nov. 19.

The president’s next video message is scheduled for Monday, Nov. 28. To read a the video message, download a PDF of the transcript.