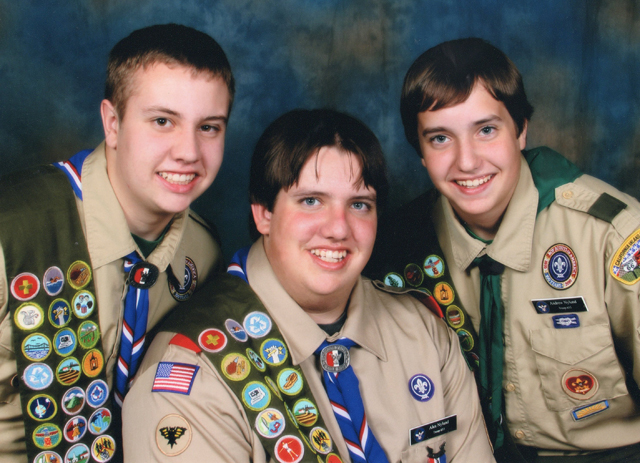 All three attend Cal Poly Pomona, and all three recently achieved the rank of Eagle Scout.

Part of the process for earning Scouting¿s highest rank involves completing an Eagle Scout Leadership Service Project, in which a Scout must demonstrate leadership skills in a way that benefits the community. The Nylunds got in touch with family friend Debbi McFall, the emergency service coordinator with the University Police Department, to plan service projects at Cal Poly Pomona.

Alex Nylund, a third-year computer science major and the oldest of the brothers, helped organize the Emergency Operations Center, a project that was taking McFall years to finish by herself. He brought together a group of about 20 people, including his younger brother Kelsey Nylund, a second-year computer engineering major.

Kelsey can testify to how seriously Alex took the project. ¿I started talking while I was organizing one of the boxes, and Alex told me not to talk.¿

¿Most of the equipment was stacked in my office,¿ McFall says. ¿It wasn¿t safe, and it wasn¿t a good solution. He provided us with space that will allow us to store these things.¿

Kelsey measured out the room and decided that buying pre-built shelves would be too expensive. Instead, he designed and built three earthquake-safe shelves himself.

¿One shelf was so big we couldn¿t get it through the door,¿ Kelsey says, ¿so we had to build it inside the room.¿

Andrew Nylund, a first-year computer information systems major, worked with McFall and Noel Vernon, associate dean of the College of Environmental Design, to sort out the contents of a red brick shelter for his Eagle Scout project.

¿It had been kind of a dumping ground for a long time,¿ McFall says of the space in ENV. ¿Somebody would receive supplies and stick them in this bunker, and then the people who needed them couldn¿t find them.¿

Andrew unearthed a lot of useful supplies, but that wasn¿t all he found.

¿I went through lots of bottles of Raid,¿ he says. ¿There were plenty of spiders in there.¿

The brothers have found that Scouting has brought them closer together.

¿It¿s great to know you have someone there behind you to keep pushing you forward and supporting you,¿ says Alex, who earned his badge in 2009.

Sharon Nylund is the advancement coordinator for their troop and has seen firsthand the positive effect that Scouting has had on her sons.

¿As children, they have to go through a panel interview to move on to the next Scouting level,¿ Sharon Nylund says. ¿They learn to communicate with adults; they learn not to be afraid. I¿ve seen them mature.¿

She¿s right to be proud. According to Bill Steele, director of the National Eagle Scout Association, only about four in every 100 Boy Scouts make it all the way to the rank of Eagle Scout.

Ed Nylund, their father, has also seen how beneficial Scouting has been.

¿Everybody wants their children to have a leg up on the way things were for them, and these guys have surpassed that by far,¿ he says. ¿When I was their age I could barely pump gas. I couldn¿t be more proud.¿