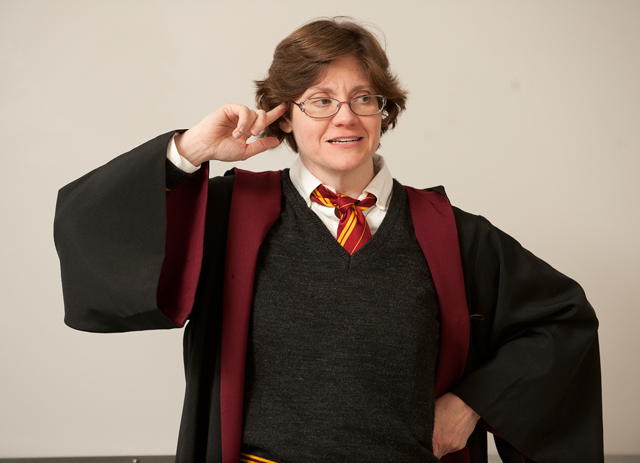 On Tuesday mornings, English Professor Melissa Aaron discusses the writings of Spencer and Milton in her English Renaissance class. In the evenings, she teaches a Shakespeare class. In between, she carries a wand and occasionally wears a wizard¿s robe to her Harry Potter literature class.

The class ¿ the first one to focus on J.K. Rowling¿s books at Cal Poly Pomona ¿ covers all things witchcraft and wizardry, as well as many Muggle, or non-magical, topics. One afternoon, students used the fifth book, ¿Harry Potter and the Order of the Phoenix,¿ as a launching pad for discussion about racism, the media, World War II and the educational system. 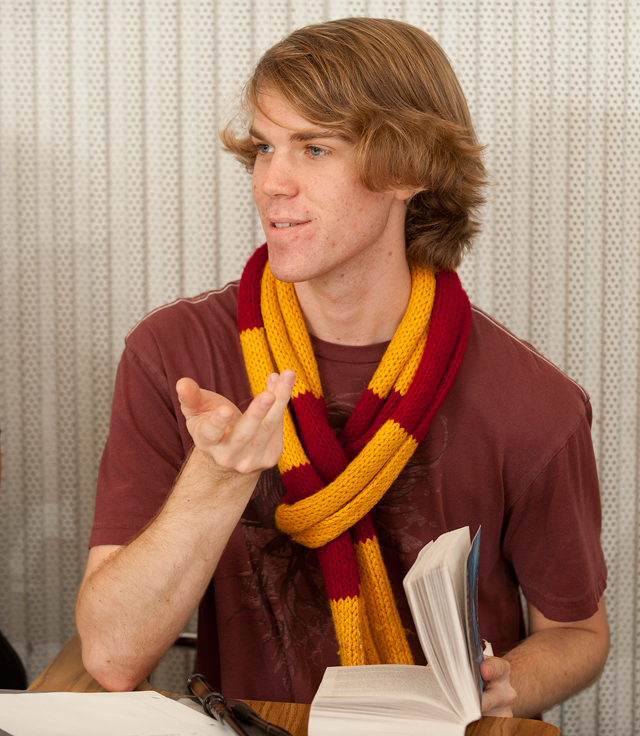 The lively conversations about the books and their connections to classical literature, history and culture are exactly what Aaron envisioned. A Shakespeare expert and unabashed Harry Potter fan, she believes J.K. Rowling¿s books deserve to be taken seriously as literature. In the seven-book series, Harry attends magic school, goes on adventures and faces an evil mortal enemy.

¿If they weren¿t good books, there would be no point. But these are good books and they deal with a lot of serious issues,¿ Aaron says. ¿It¿s also a way to introduce classical, Medieval and renaissance literature.¿

For example, Aaron says, one part in Book 7 echoes a scene in Shakespeare¿s ¿Henry V.¿ After a major battle, Harry Potter embraces, mourns and comforts his friends and supporters. In the play, King Henry disguises himself, talks to and encourages his solders the night before the final battle.

¿That every wretch, pining and pale before, Beholding him, plucks comfort from his looks: A largess universal like the sun / His liberal eye doth give to every one, Thawing cold fear, that mean and gentle all, Behold, as may unworthiness define, A little touch of Harry in the night.¿ (IV.prologue.41-47)

As in traditional literature classes, students are required to write a research paper, discuss the texts in class and in small groups, and blog about topics set by Aaron. One major difference though is the high-level of familiarity about the books, as well as the students¿ active participation.

¿I¿ve never taught a class where everyone has read all the books,¿ Aaron says. ¿[These students] have all read these books before they walked into the room.¿ 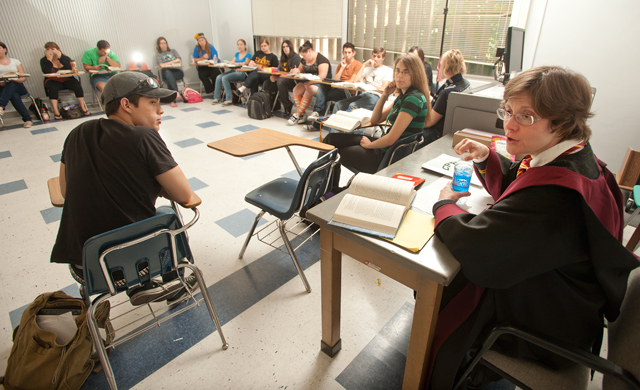 Of course, nearly everyone in ENG 499 (Harry Potter as Literature and Cultural Studies) is a fan and enjoys debating questions that only fans would understand: Is Voldemort a misunderstood character? Does Percy Weasley suffer from middle child syndrome? Could Trelawney have made the prophesy if Snape weren¿t eavesdropping?

Aaron appreciates the eagerness and freewheeling dialogue. After all, a Harry Potter class would not be the same, or even possible, without fans. Fittingly, she ends each class with a rap of her wand on the whiteboard.

(Top photo: Professor Melissa Aaron leads a discussion in her Harry Potter as Literature & Cultural Studies class. Middle photo: David Krausman joins in the discussion. Bottom photo: The upper division class focuses on “Harry Potter and the Order of the Phoenix,” the fifth book in the series, during the Oct. 18 class.)