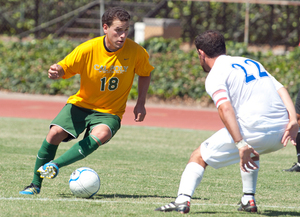 It marks the first time in CCAA history that a Broncos’ player has attained the accolade. Gonzalez topped the conference this season with 33 points, scoring a league-best 14 goals and totaling five assists. His point and goal totals rank in the top three for the West Region and top 15 nationally at the Division II level.

Joining Gonzalez on the All-CCAA First Team is senior midfielder Juan Mejia, who ranks among the top 10 in the conference in assists with five. Mejia was one of seven Broncos to appear in all 18 matches this season.

Enns ranked second for the Broncos in points with 13 after totaling six goals and adding an assist. His 2011 season featured a three-goal week that helped CPP capture wins against Cal State Monterey Bay and San Francisco State. Those performances earned the Fresno, Calif., native selection as CCAA Player of the Week.

Gutierrez bolstered a strong Broncos’ back line and finished with the most minutes for CPP with 1,625. That was just 64 minutes shy of playing the entire season. Aside from contributing to the team’s low goals against average of 1.28, Gutierrez also added two assists on the offensive end.