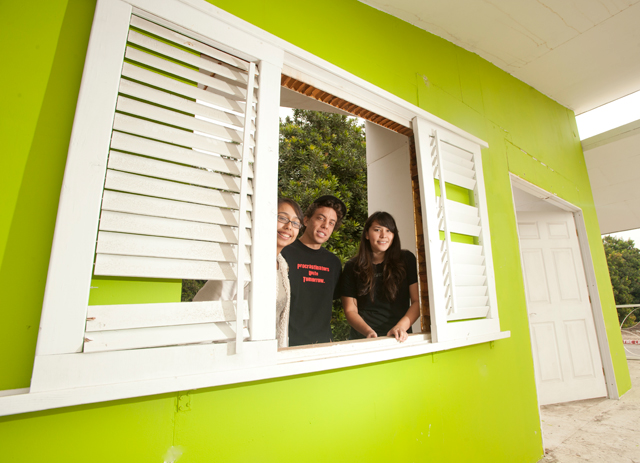 Responding to the urgent need for affordable housing, architecture students have designed a low-cost, prefabricated model house for earthquake victims in Haiti.

The project started about a year ago when Pacific Green Innovations (PGI), an Oregon-based manufacturer of modular homes, reached out to architecture professors Juintow Lin and Michael Fox. The company needed building designs that could be manufactured on a large scale, conserve materials, be easily constructed, meet certain structural standards and fit residents¿ needs.

¿This project is about getting as many homes built as possible. The houses need to be simplified and affordable,¿ says Lin, whose upper division studio classes worked on the project last winter and spring quarters. ¿It¿s real project that will be built. There¿s a real need to understand what the clients¿ needs are.¿

Working in teams, students came up with a few designs, created detailed construction documents and developed proposals for planned communities with roads, communal kitchens and bathrooms, gardens and schools. In the spring, a team built the front exterior of the Takit-EZ House, from laying a foundation to building walls and painting the exterior bright green.

The house features an enlarged porch to accommodate outdoor cooking, an asymmetrical roof and French doors to match the architecture of existing Haitian homes. What makes the 500-square-foot house unique are the resin-impregnated Kraft paper panel walls developed by PGI, which are less expensive than other similar building materials. The panels, whose honeycomb structure and magnesium board facings give them strength, will be manufactured in Haiti using mostly locally sourced materials. In addition, the house can be erected by local laborers in a few days, with a total finished cost of about $8,000 per unit.

A fully functional model was built in Port-au-Prince this summer as part of the Building Back Better Communities Expo, which was organized by the Haitian government. The expo showcased about 60 model homes, but Takit-EZ was the only one built entirely in Haiti by Haitian workers, according to Lin.

¿All of the Haitians that I spoke to said they like the house very much, especially when compared to the other houses in the expo,¿ says Amy Marino, an architecture graduate student who visited Haiti this summer through a volunteer program and for research. ¿Specifically, they said it looked familiar and welcoming. They really appreciated the increased light and ventilation that the [clerestory windows] provided. They appreciated the color, which was bright, which is traditionally the case in Haiti.¿ 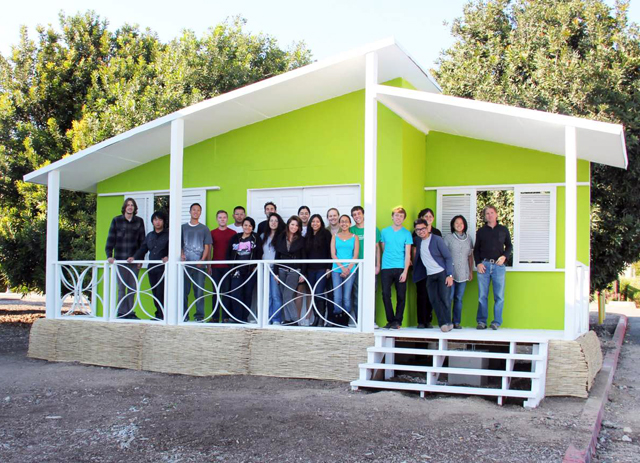 One of project¿s challenges was learning about and designing for Haitian society, including their architectural preferences and lifestyle. Reflecting Haitian living conditions, the original plans for the house do not include plumbing, electricity, bathroom or indoor kitchen. At the expo, the Takit-EZ house was built on a cement slab instead of the less expensive elevated concrete pier, which Haitians dislike because of its feeling of impermanence.

¿I learned of the immense value in getting honest feedback from Haitians and Haitian builders,¿ Marino says. ¿It was very refreshing to be reminded, and in very real way, that you should never start assuming answers or stop asking questions.¿

Students also factored in the environment ¿ strong winds and heavy rains during hurricane season, hot weather and the possibility of more earthquakes. The 7.0 temblor on Jan. 12, 2010, killed more than 200,000 people and toppled countless buildings. The Takit-EZ home is not necessarily designed to withstand extreme shaking, but the walls are not as dangerous as unreinforced concrete, which killed many Haitians, says architecture senior Daniel Schnizler.

¿It¿s not just about making the structure withstand earthquakes, it¿s about making sure the material doesn¿t kill people,¿ Schnizler says.

PGI has received several orders for the Takit-EZ house and is planning to go into full production in late 2011. The company is also planning for two large-scale home developments in Port-au-Prince that will be funded through private foundations and government agencies.