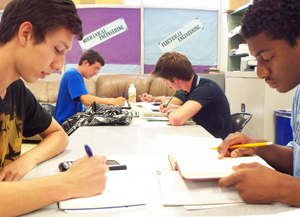 QUEST, a college prep experience for engineers, immerses students in college life and academics the summer before their first year at Cal Poly Pomona. Participants learn about the campus and its resources, and they take math and physics courses that help build a foundation for the engineering curriculum.

The program schedules an hour of study time each day, but it¿s not enough to learn the material, finish homework and work on projects. The shortage of built-in study time is intentional, and it’s a lesson that QUEST students need to discover on their own.

¿We allot one hour for independent study, but they learn that it may take two or three hours,¿ says Milton Randle, director of the Maximizing Engineering Potential (MEP) program, which organizes QUEST. ¿We¿re here to challenge the students¿ expectations. They¿re trained to be good high school students, but they¿re not trained to be good college students.¿

The difference in study time is one of the many eye-opening experiences that QUEST students will grasp. The program also challenges them to think critically, manage time effectively and apply abstract concepts to real-world situations. Since the orientation program began in 1994, QUEST (Quality Unites Engineering and Science Teams) students have better retention rates than similar students who didn¿t attend, particularly in the first two years of study, which have the highest attrition rates for engineering students. 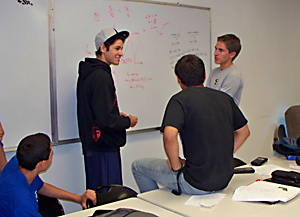 Patty Mucino, the MEP retention coordinator, says the program doesn¿t force students to change their behavior, but she hopes it persuades many of them to better approach college academics. Material must be learned, not memorized, and self-motivation is invaluable.

¿I suppose my ¿Aha!¿ moment would be when I realized the difference between high school and college study time commitment,¿ says Brian Price, an aerospace engineering freshman. ¿In college, and especially in engineering, you can’t slack off in your courses or else you will fall behind quickly because there is so much material to learn.¿

Not only did Price feel the gap between high school and college, he says he picked up several pointers that will help him succeed. One of them is making friends with other engineers.

In fact, group learning, team projects and team competitions are the norm in the College of Engineering.

¿The program is highly interactive. So many engineering students have a loner personality and are initially resistant to working collaboratively,¿ Randle says. ¿Eventually, they get the value of it. They get that this is good for them.¿

Ryan Gunawan, an aerospace engineering freshman, says he discovered that group learning is more effective than studying in isolation. ¿There are more people trying to solve the same problem at the same time, so there are multiple people that can identify where you got something wrong if you messed up.¿

Mechanical engineering freshman Ryan Luna came to a similar conclusion: ¿The main thing about MEP and QUEST is that they create a support network of friends. This networking is very important because if you miss something in class or don¿t understand the material, you have other students around you who can help.¿

Funded by private donations and grants, QUEST accepts about 50 students, less than 10 percent of the college¿s incoming freshman class. The students, who are mainly from historically underrepresented backgrounds, also tour the library to learn about research, go on field trips, meet professional engineers, take a personality assessment, and learn about campus policies and resources. They receive additional mentoring from upper-division students, faculty members and staff.

Zenon Cortez, a QUEST facilitator, says he enjoys helping younger students grow and succeed. He also wants to contribute to a program that helped with his own transition from high school to college.

¿These programs are important because they both boost you through the academic part of college and are your gateway to extracurricular activities and industry connections that students who come to class and go home simply don¿t have,¿ says Cortez, a third-year aerospace engineering major. ¿It splashes the cold water of college-level work on you and makes you acclimate. Others do this too during fall quarter, it¿s just that their GPA suffers for it.¿

Cortez offers some friendly advice to new and returning students: