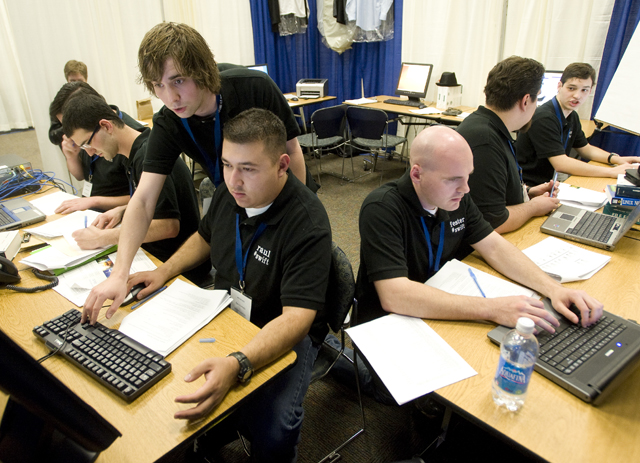 The College of Business Administration will fast track its plans to create a West Coast cybersecurity league thanks to a $3 million grant from the National Science Foundation awarded to Cal Poly Pomona and a consortium of western colleges.

Grant money will be used to create CyberWatch West, a center dedicated to increasing the number of cybersecurity professionals among California, Washington and Oregon residents. The center will focus on strengthening academic programs, enabling professional development for faculty, promoting student development and encouraging partnerships between schools and industry. CBA expects to receive approximately $500,000 of the grant money and will focus on student development.

Computer information systems Professor Dan Manson, who also is director of CBA¿s Center for Information Assurance, will oversee the Cal Poly Pomona portion of the grant.

¿With our connections and knowledge of the cybersecurity community, we can apply NSF funding in ways that can make an immediate impact on students,¿ Manson says. ¿Cal Poly Pomona looks forward to helping young adults gain the knowledge and skills to contribute to this lucrative career field that¿s also vitally important to this country¿s national security.¿

The creation of CyberWatch West and its goals is already being heralded by those who most know about the importance of having a robust cybersecurity workforce.

¿As chairman of the Senate Intelligence Committee, I am all too aware of the national security threat posed by cyber attacks,¿ says Sen. Dianne Feinstein. ¿We need more education and professional development to build a strong cybersecurity workforce in California and across the country. I congratulate Cal Poly Pomona on receiving this grant and for preparing California students to earn jobs in this important and growing sector of our economy.¿

CBA is ideally suited to implement its portion of the NSF grant as it has longstanding ties to government agencies, nonprofits and professional organizations dedicated to encouraging students to pursue cybersecurity careers. The college has hosted the three-day student competition Western Regional Collegiate Cyber Defense Competition for the past four years and has partnered with nonprofit U.S. Cyber Challenge (USCC) to host the California Cyber Challenge Camp, the only USCC camp offered in the western United States.

As the organizer of the West Coast division of the newly formed National Cyber League, CBA will recruit students to compete in a league that is modeled after professional sports leagues, which have season and post-season games. The West Coast division will compete virtually against teams from the Midwest and East Coast beginning April 2012 and include business, science and engineering students from Cal Poly Pomona.

Manson says the reality is that many high schools and colleges are not equipped to educate young people in cybersecurity. In order to sustain interest in the field, competitions must be offered to students so they can continually refine their skills while connecting with people throughout the country who share the same interests.

The college will also use the grant money to create and expand student clubs, professional associations, camps and internships dedicated to cybersecurity as well as outreach to K-12 schools.

Mt. San Antonio College is the main grant recipient and will serve as the physical home of CyberWatch West. Other colleges and universities in the consortium are: CSU Dominguez Hills, CSU San Bernardino and Whatcom Community College in Bellingham, Wash.