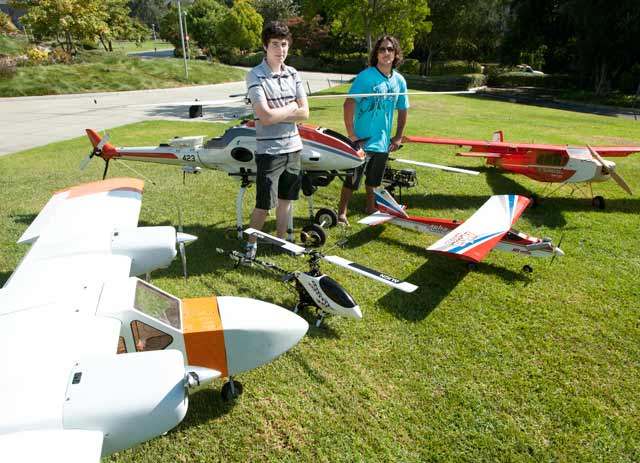 Aerospace engineering Professor Subodh Bhandari has received a $360,000 grant from the National Science Foundation to continue research on the development of robust controllers for unmanned aerial vehicles (UAVs).

The department has a variety of UAVs, from remote-controlled airplanes to the Yamaha R-MAX helicopter, which was a gift valued at $200,000 from Northrop Grumman.

¿We have the equipment and hardware available,¿ Bhandari says. ¿We need mostly time, time for faculty and undergraduate students to work on these research projects.¿

With numerous military and civilian applications, UAVs are an increasingly important instrument in the aerospace industry. Loaded with sensors, cameras and telemetry equipment, the aircraft can perform reconnaissance operations, assist in rescue missions, and survey areas damaged by flood, fire or earthquake.

At Cal Poly Pomona, faculty and students are developing custom controllers that will allow UAVs to fly on autopilot. Without someone in the cockpit, the control system must be programmed to handle all elements and situations, including changes in flight conditions, wind and other flying objects. That involves hundreds of hours of flight testing in the field and in the wind tunnel, collecting data and programming. Each control system is also customized to each aircraft in order to maximize its flying abilities.

Developing custom controllers is time- and labor-intensive, says aerospace engineering junior Hovig Yaralian. A team of full-time engineers and programmers needs about a year to develop one, which translates into two or three years for a student team, Yaralian says.

The NSF grant will involve faculty and students from aerospace engineering, electrical & computer engineering, engineering technology, and computer science. Bhandari, who says UAV projects are collaborative by nature, hopes to bring in additional funding and partnerships with companies and other universities.

¿Local industries like Northrop Grumman and Boeing want our students to work in a collaborative environment,¿ Bhandari says. ¿That¿s why this project is good. All the research we do on UAV technologies requires expertise from various departments within the colleges of engineering and science.¿

(Photo: Matt Rose and Hovig Yaralian, both aerospace engineering majors, stand with a fleet of aircraft used in UAV research.)