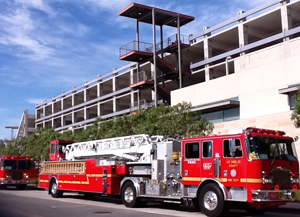 [Updated 12:13 p.m.] The parking structure has reopened after police and firefighters responded to a car fire Friday morning.

The car owner, a student, was notified of the fire, and the car has since been towed out of the structure. The nearby cars did not appear to catch on fire, and all affected owners have been notified, according to University Police. No injuries were reported.

Police were notified at 9:45 a.m. by a student who was walking through the parking structure. Within two minutes, Cpl. Don Kingwell responded to the fire on the fourth level, and he and Sgt. Alfonso Valadez used fire hoses in the structure to knock down most of the fire. The Los Angeles Fire Department arrived a few minutes later.

“It’s good when people are observant because it buys us more time,” says University Police Chief Michael Guerin. “[The officers] were there within two minutes. They jumped right in and assumed firefighter duties, which we do actually train for in emergencies.”

Guerin notes that the parking structure has fire hoses and special pipes and hookups for firefighters, given that fire trucks cannot drive into the structure.

“We have a special response plan for the parking structure, given the close quarters,” Guerin says. “We work hard to drill for these situations because it’s a special place and it’s hard to get into.”

The parking structure was cleared and reopened around 11:30 a.m.