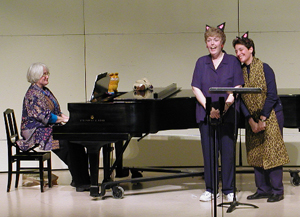 ¿Director¿s Choice,¿ the 2011 Charles Lindsley Memorial Vocal Scholarship Fundraiser, will be a special affair celebrating the life of Charles Lindsley as well as the retirement of the production¿s longtime director. Susan Burns is retiring after serving 32 years on the faculty of the music department. Coincidentally, Lindsley was on the committee that hired her in 1979.

Charles Lindsley taught music and voice and directed opera and choral groups at
Cal Poly Pomona from 1970 to 1992. The annual fundraiser started in 1994, a year after his death, by Burns and the current department chair, Iris Levine. Each year alumni, faculty, and students perform music from various genres, and one outstanding vocal student receives the memorial scholarship.

Burns’ presence and direction will be missed, colleagues say.

¿I am happy for her,¿ Levine says. ¿I know there will be a big hole in the department, and it won¿t be filled by one person, but by a variety of people¿ We as a department will miss her.¿

Alyssa Cossey, a 2006 alumna and music teacher for Bonita Unified School District, appreciates Burns¿ efforts to create a sense of community in the department. ¿Everyone, and I mean everyone, was encouraged to participate in department-wide performances like the Lindsley Memorial Scholarship Concert ¿ even scared freshmen like myself ¿ or Music Theatre Workshop. She wanted to encourage her students, never tear them down.¿

The memorial concert will be held Friday, Oct. 28 at 8 p.m. in the Music Recital Hall. Tickets are $15 for general admission and $10 for students. Tickets may be purchased online at https://csupomona.tix.com/. A free reception for Burns follows immediately after the performance in Room 24-105.