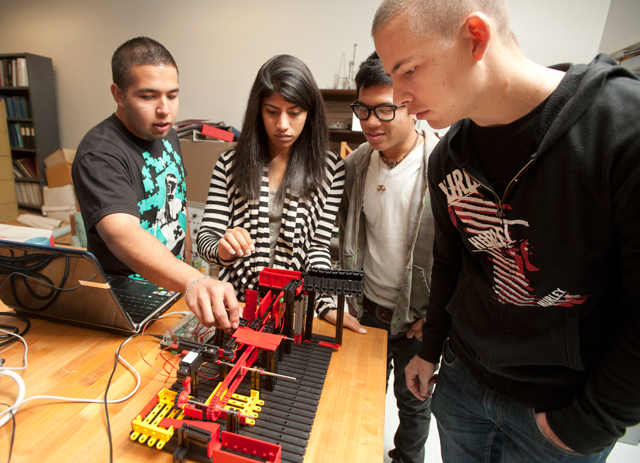 Hispanic Business magazine, in its latest look at the state of diversity on college campuses, has ranked the College of Engineering eighth in the nation, and first among the CSUs, in attracting Hispanic postgraduate students and helping them succeed academically.

¿The faculty and staff in the College of Engineering work diligently to prepare a highly skilled and diverse workforce, and we are proud to consistently award more engineering degrees to Hispanics than any other college in California,¿ Dean Mahyar Amouzegar says. ¿The ranking by Hispanic Business Magazine affirms our efforts in our graduate programs to grow opportunities for student research and hands-on engineering experiences.¿

Amouzegar reports that ¿this year the college hired six new engineering faculty, and next year will hire seven more in five departments.¿ He added that he is ¿committed to further building a talented and diverse faculty that can help our students develop skills necessary to succeed in engineering and make contributions to the society at large.¿

Paola Chavira, who earned both her master¿s degree in engineering management and her bachelor¿s degree in mechanical engineering at Cal Poly Pomona, credits a community college counselor for recommending the university.

¿He said it had an excellent reputation for engineering and was a Hispanic Serving Institution, which would give me many opportunities ¿ and he was right,¿ Chavira says. ¿The campus was awesome, the hands-on experience really inspired me, and the professors and counseling were great.¿

She was introduced early on to the MEP program ¿ Maximizing Engineering Potential ¿ which had a major affect on her academic success. MEP¿s mission is to increase the number and diversity of students who graduate in technical disciplines, including those from historically underrepresented groups. The program is grounded in learning communities, mentorship, connections with industry and the cultivation of high expectations.

¿We developed leadership skills and received excellent career guidance,¿ Chavira says. ¿We also had the opportunity to meet one on one with industry reps, which put us ahead of everyone else when it came to job openings.¿

Chavira says her graduate school experience, as she expected, focused on intense study, often in a very individualized way.

¿The professors were very good at reaching out,¿ Chavira says, reflecting on her master¿s project, which involved procedures for developing a construction schedule. ¿My education at Cal Poly Pomona was even more than I thought it would be.¿