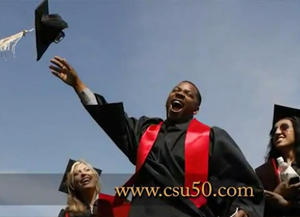 Over the past 50 years, the California State University has educated 2.6 million people who become drivers of California¿s economy in every industry ¿ agriculture, engineering, business, technology, media, hospitality, healthcare. For every $1 that the state invests, the CSU generates $5.43 for California¿s economy, according to a 2010 report.

A new video, ¿CSU Working for California for 50 Years,¿ celebrates the achievements of alumni and the impact of the universities over the past five decades.

In the five-minute video, CSU alumni testify to the transformative power of higher education.

Pervaiz Lodhie, president and founder of LEDtronics and a Cal State L.A. alumnus, says engineers produced by the CSU have revolutionized the technology industry in California. ¿The technological revolutions in the last 30, 40 years have all started from California. The rest of the country benefits, and now the rest of the world benefits.¿

U.S. Secretary of Labor Hilda Solis, a 1979 political science alumna of Cal Poly Pomona, says supporting the CSU is key to California being on the cutting edge in the 21st century.

¿For us to be competitive in the global world, we need to have access to campuses and programs that the CSU system offers and has been offering for the last 50 years,¿ Solis says.