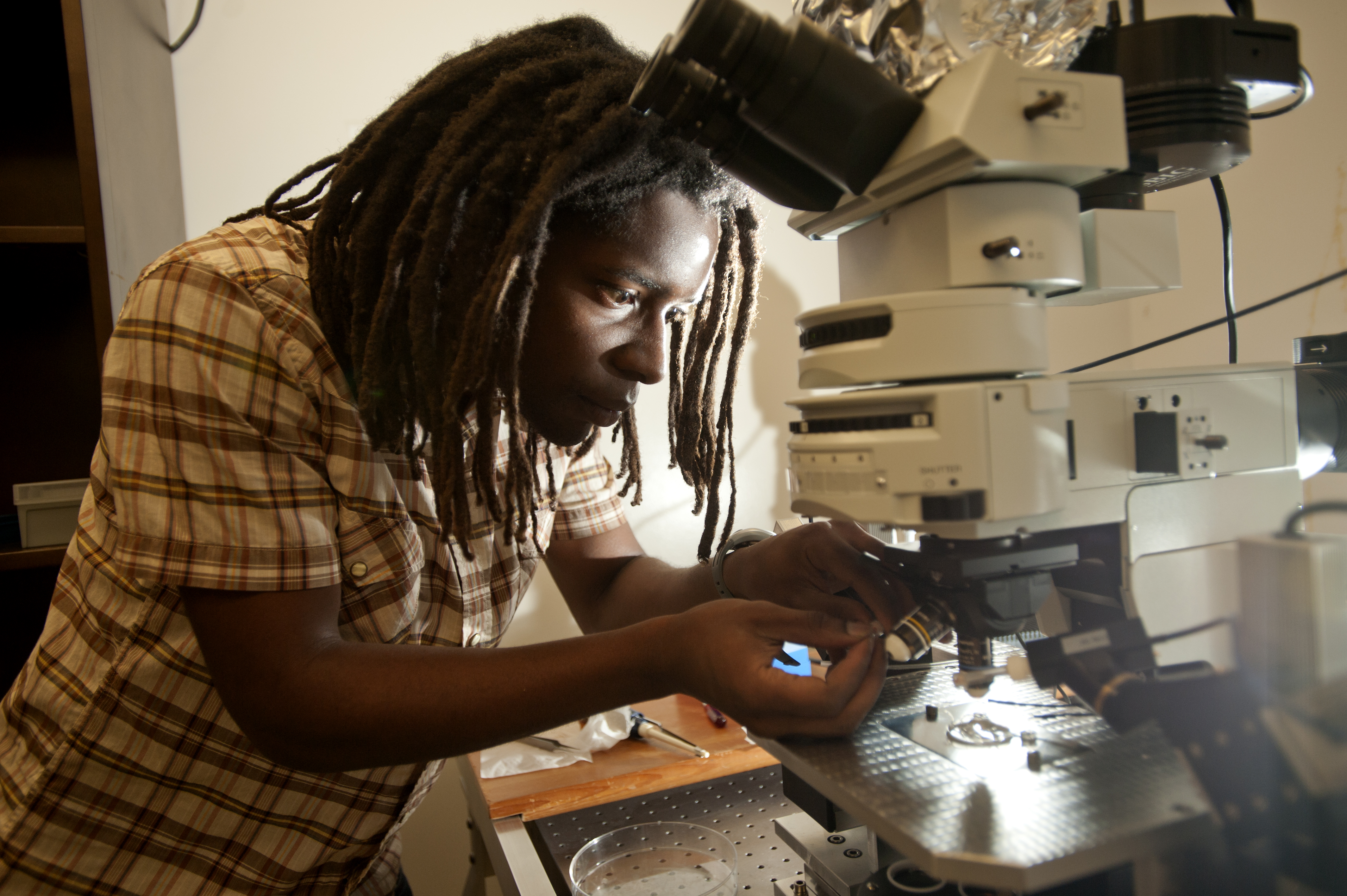 The campus can appear almost deserted at times during the summer ¿ but looks are deceiving. Duck your head into one of the ubiquitous science or engineering labs, and you will most likely see students peering into microscopes, calibrating equipment, conducting experiments or analyzing their findings.

Summer is a boom time for scores of student researchers to focus on a project without having to dash off to class or study for tests.

¿Most faculty in science or engineering have students working in their labs in varying capacities,¿ says Alex Small, an assistant professor of physics who organizes weekly seminars during the summer at which students can see what their peers and professors are doing. He says hands-on learning is essential to gaining
knowledge.

¿I can teach a certain amount of trouble-shooting in a lab class, but the process is just fundamentally different in research, because we¿re working on something where the answer is not yet known to anybody,¿ Small says. ¿That, to me, is the best reason to have students in research: It¿s the ultimate in learn by doing. Additionally, I can show things that are far more cutting-edge than you¿ll see in a textbook.¿

Mechanical engineering major Brian Ramirez, who lives in the Residential Suites during the summer, relishes the opportunity to focus exclusively on his research, which involves ¿creep testing¿ composites in the materials lab.

¿I¿m not worried about classes this time of year,¿ he says. ¿I can come in at odd hours to check things since I¿m just five minutes away.¿

He is not only meticulously testing epoxy and carbon fiber specimens for their durability and breaking points, he built the specimens, as well as the mechanical rig that tests them. A first-generation college student and rising senior, Ramirez plans to enter a doctoral program, with a long-term goal of working as a researcher at Jet Propulsion Laboratory.

Across campus, on the first floor of the College of Science, Deandre King is studying muscle tissue using adenosine triphosphate, a molecule that provides energy to nearly all cells, from bacteria to humans. Commonly known as ATP, the compound has long been known to exist inside the muscle cell, and its presence outside the cell as a ¿signaling molecule¿ was discovered 30 years ago. Building on that knowledge, King¿s faculty mentor, biology Assistant Professor Andrew Voss, recently found that ATP¿s
effects on skeletal muscle may have implications for muscle fatigue.

Understanding muscle fatigue is still in many ways a mystery, says King, a senior and McNair Scholar who plans to attend medical school. He is quick to credit his colleagues, graduate students Kenji Yoshino and Chris Waters, as well as Voss, for his growing understanding of the topic.

¿I like knowing how the body works, that it¿s not magical, that things happen for a reason, even if we don¿t know the reason yet,¿ King says.

Teamwork is intrinsic to many research projects, including the one taking place in the thermal fluids lab that has been aerospace engineering major Luis Andrade¿s home away from home this summer. He and several colleagues are trying to program two unpiloted planes to fly in autonomous formation. The choreography involves two Alpha 60s about 5 feet long with a 6-foot wingspan, a notebook computer that serves a ground station, a processor that serves as an autopilot, an interminable number of calculations and resolute patience.

Projects and personalities vary widely, but student researchers are bound by a common trait: unabashed enthusiasm for their work.

Catherine C. Ploneda would echo those sentiments. The chemical engineering major talks about polylactic acid with the same intensity that many people reserve for their favorite reality show or sports team, but there¿s a lot more at stake than fleeting fame or a winning season. The polymer, commonly known as PLA, could be a game-changer in the food industry if Ploneda¿s research helps lay the foundation for commercial applications.

¿My goal is to create a non-petroleum-based plastic that also inhibits bacterial growth,¿ she says. ¿PLA used in food wrap would be biodegradable and could make food storage safer.¿

Her corner of the lab is a cornucopia of Petri dishes, bags of PLA pellets, jars of chemicals and an array of tubes. In a way, the lab is her kitchen, and she¿s trying to devise the perfect recipe using PLA and magnesium oxide, the antibacterial agent. Some samples are too thin or tear; others allow bacteria to fester; but some look promising.

That¿s the essence of research: finding what works and doesn¿t work, and building on that newfound knowledge, Ploneda says.

¿I want to do something that¿s hard,¿ she says. ¿I feel like I can really accomplish something.¿
And it doesn¿t have to wait until the fall.