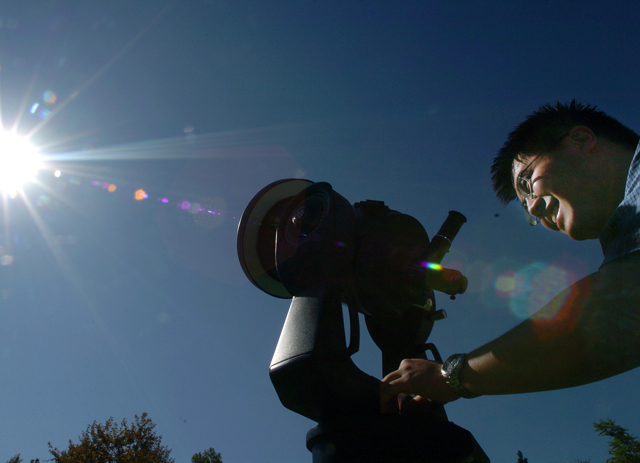 ¿The Universe in 10 Weeks¿ is a popular class on campus, but most students aren¿t aware that astronomy is also an available field of study within the physics department at Cal Poly Pomona.

Better marketing is one reason that the physics department has changed its name to the Department of Physics & Astronomy.

¿It sounds like a small change, but it¿s a big deal,¿ says astronomer and physics Professor Alex Rudolph. ¿Putting astronomy in our name is a better step to letting people know that we have astronomy and that it¿s a strong and growing program.

¿I¿ve had many students tell me that they might have majored in physics if they knew that they could concentrate on astronomy.¿

The department¿s name change more accurately reflects the curriculum and faculty interests. The general education course, the Universe in 10 Weeks, is usually filled to capacity, and the yearlong astrophysics sequence for upper division physics majors and minors has steady enrollment.

¿The new name is a better reflection of what we¿re doing now,¿ says Steven McCauley, professor and department chair. ¿It¿s also an area where we¿re poised to grow.¿

In 2009, the department received a $1.24 million grant from the National Science Foundation to bolster the astronomy program and immerse more students in high-level research. Rudolph, who oversees the NSF grant, has also obtained funding from NASA to send students on internships with the SETI (Search for Extraterrestrial Intelligence) program. Over the past couple of summers, five students have completed astronomy internships through the California-Arizona Minority Program for Astronomy Research and Education (CAMPARE) program.

The department is also working with the aerospace engineering department to develop an astronomy minor, which would include some cross-disciplinary courses. It will begin a search this year for a tenure-track faculty member with a specialization in astronomy or astrophysics.

¿Recruiters from JPL have told us that the combination of an aerospace major with an astronomy minor would be a terrific background for someone seeking employment there,¿ McCauley says.

(Photo: Herwick Mok, a senior physics major, looks through a telescope at the planet Mercury on Nov. 8, 2006.)