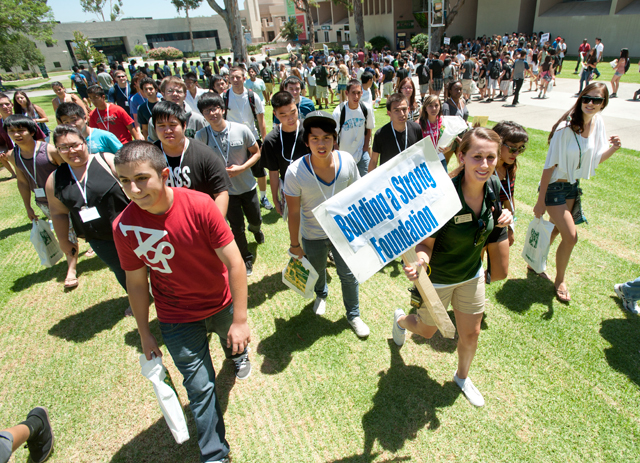 Becoming a college student doesn¿t happen overnight, nor does it happen in isolation. When freshmen come to Cal Poly Pomona for summer orientation, they may look like college students, but that doesn¿t mean they feel like one or act the part.

¿These students don¿t feel like Broncos yet because they still need to return their cufflinks from prom,¿ says Traci Lew, senior coordinator of orientation services. It¿s an image she often paints when training orientation leaders who will help new students begin the transition from high school to college.

This summer, about 3,100 freshmen learned that college encompasses more than going to class, living in a residence hall or meeting new people. It¿s also about setting goals for their education, knowing whom to ask for help, developing self-discipline, and building relationships with faculty and peers that can last a lifetime.

During the three days and two nights, newcomers tour the campus, meet with their academic advisors, register for classes, and learn about student government and clubs. They receive a hands-on lesson in navigating BroncoDirect, the all-important online system that manages course enrollment, accounting, financial aid and other administrative necessities.

In addition, each freshman is matched with an orientation leader and group, giving participants the opportunity to bond with their peers. Though the time is short, making connections is a critical first step.

¿Our goal is to give students a snapshot of what¿s to come,¿ Lew says. ¿This is just an introduction to campus. We hope that their connections at orientation will enable them to seek out the resources that will keep them on track toward a timely graduation.¿

Snah Desai, a freshman business student, says he was nervous at first about getting classes and staying on track to graduate in four years. Meeting with his advisors calmed his fears and assured him of his next steps.

¿I got a lot of information about what I need to do. The advisors are open, and they want us to come in once a quarter to talk about our future plans,¿ he says. ¿It was really nice to hear that.¿ 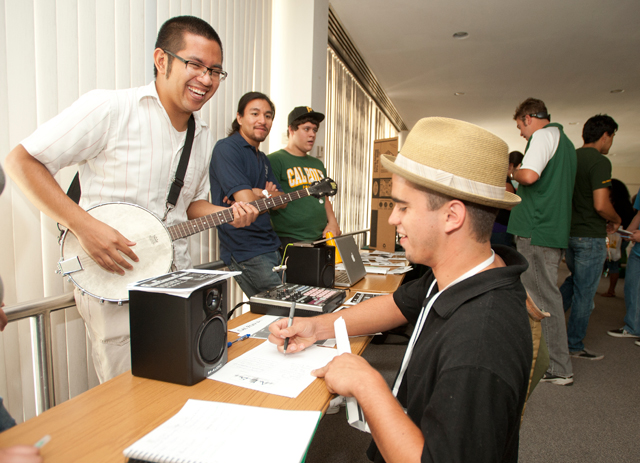 When summer orientation became mandatory for all new students in 2004, it included two full days, later adding an overnight stay. This year, all freshmen were required to participate in the two-night sleepover. It¿s important to feel socially accepted and comfortable on campus before starting fall quarter, Lew says.

¿The overnight experience eases their concerns about making friends and fitting in. Then, students can concentrate on the really important stuff: getting classes, applying for financial aid, adjusting to college life and learning to be academically successful,¿ Lew says.

Orientation was a tremendously effective launching pad for Jessica Smith, a third-year psychology student. She made friends, learned about the international psychology honor society and signed up for the four-year graduation pledge program.

¿I¿m kind of a shy person, so it takes me a few times of seeing people to talk to them. Orientation helped me feel more comfortable on campus,¿ says Smith, who serves as historian for Psi Chi. ¿Orientation is a really fun time as long as you keep yourself open.¿