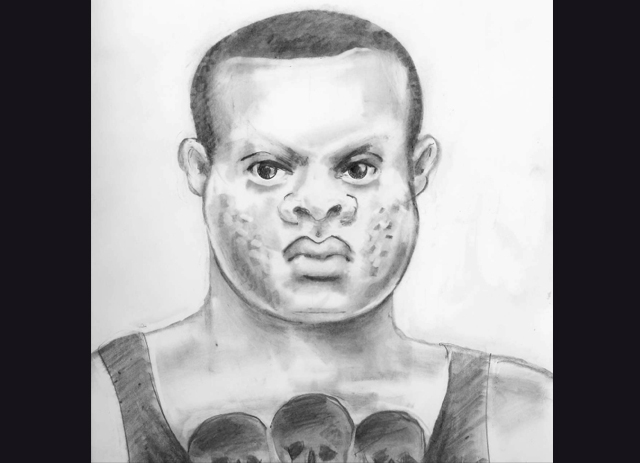 Cal Poly Pomona police on Thursday released a composite
sketch of the suspect in a sexual battery that occurred a week ago in a
restroom on campus.

The suspect is described as a black male, about 40 years
old, between 5-feet-10 and 6 feet tall, and weighing about 350 pounds. He has
short hair, is clean-shaven and has yellow teeth, with an upper right tooth
missing. Most distinctive, he has three skull tattoos across his chest. The
victim said the man also appeared dirty, had bloodshot eyes and smelled of urine.
Based on the detailed description, it does not appear that he is a member of
the campus community.

The victim, a female custodian, was cleaning a men¿s
restroom near the running track and Parking Lot K around 12:45 p.m. on July 28
when a man wearing a black scoop neck tank-top, blue denim pants and white
tennis shoes appeared suddenly and forced her against a stall. He exposed
himself and demanded that she perform a sexual act. He then ran away, perhaps
startled by a noise outside the restroom.

University police continue to pursue leads in the case.
Anyone with information that may assist in the investigation is urged to call
the University Police Department at (909) 869-3070. Anonymous tips may be
called into a recorded line at (909) 869-3399.

Members of the campus community are reminded to
be aware of their surroundings, travel with others when practical, and notify
authorities immediately of any suspicious persons or situations. To call campus
police, use any Code Blue callbox or dial (909) 869-3070 from a cell phone.
(Cell phone 9-1-1 calls are routed to the California Highway Patrol).