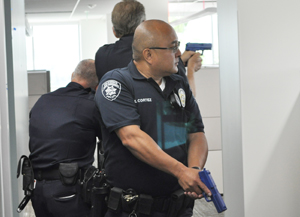 It was a training exercise that confronts the unthinkable.

University police and neighboring agencies conducted an ¿active shooter drill¿ on a recent Saturday morning that lays out a chilling scenario: A mentally ill man attends his former employer¿s open house. He discreetly enters the building and makes his way to the men¿s room, where he loads his gun. He comes out firing, hitting one person in the chest and another in the jaw. A third random victim is shot in the arm, and a fourth, though not wounded, is emotionally incapacitated. The building marshal and security officer call 911, and the university police respond.

¿You¿ve got to do a lot of things simultaneously,¿ says University Police Lt. Bruce Wilson, who helped coordinate the drill, which was conducted at a soon-to-be occupied Edison building in Innovation Village and involved about three dozen participants. ¿We wanted to focus on making the best choices given the circumstances and our resources. It¿s a skill set you have to keep honing.¿

The day started with a briefing at university police headquarters. Participants were given an outline of the department¿s training goals and a review of department policy on engagement of active shooters. 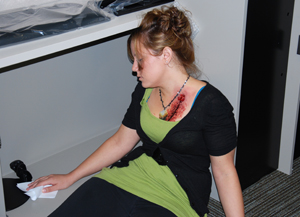 ¿Even though you know it¿s an exercise, you don¿t know how you¿re going to react until you go through it,¿ Wilson says. ¿As it unfolds, you have to make quick decisions and adjust, just as you would in real life.¿

The first officer to arrive at the scene sets up a command post out of visible firing range of the building and quickly confers with the security personnel. More police arrive, as do county firefighters from Battalion 19, paramedics, ambulances and Edison security.

As some officers determine the identity of those who have fled the three-story building ¿ one could be the shooter ¿ another group dons body armor and prepares to enter after hearing gunfire echo from inside. When they make their way inside, they¿re confronted by a confusing honeycomb of desks and partitions. The shooter could be anywhere.

First, they locate the wounded and take them to safety. They are easy to recognize because the moulage makeup gives their injuries a frighteningly realistic appearance. Next, they meticulously scour the building, row by row, office by office. They know the gunman could be stalking other victims, so the decision is made: He must be neutralized. The police close in, confront the gunman and open fire, killing him.

The 45-minute scenario ends, but the exercise continues with the ¿hot wash¿ ¿ a recap the events and the emergency responders¿ actions. 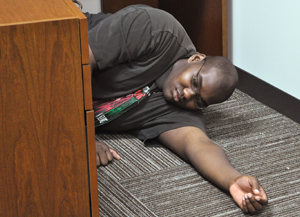 ¿It¿s always a good thing to work with other agencies at this level,¿ says Debbi McFall, the university¿s emergency services coordinator. ¿We¿re able to share expectations and maximize the use of equipment and resources.¿

She praised the Edison¿s willingness to use its new building for the drill.

¿Considering the logistics, it¿s not easy to conduct this kind of exercise on campus,¿ McFall says. ¿Being able to drill in an unoccupied building, one that¿s unfamiliar and challenging, was a huge benefit. It also really helped reinforce our relationship with Edison.¿

(Top photo: Corporal Don Nyeholt, left, Investigator Ken Kirkoff and Officer Enrico Cortez meticulously make their way through the Edison building. All guns used in the drill were simulator weapons. Middle photo: Kelly Walter, who is a student as well as community service officer on campus, plays the role of a shooting victim, with moulage makeup depicting a chest wound. Bottom photo: Warren Owasu, who is a student as well as a community service officer, plays the role of the shooter, who was killed because he continued to pose a lethal threat.)