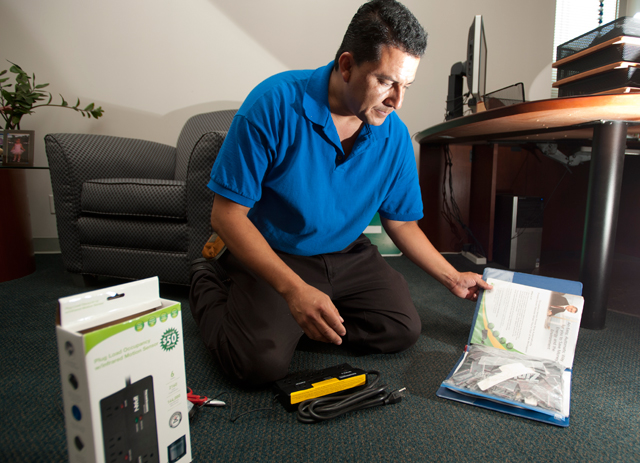 About 1,700 faculty and staff campus workstations are being equipped with smart power strips that will save the university $30,000 in energy costs annually.

Similar in appearance to a standard power strip, the ¿smart¿ version comes with an infrared sensor that detects when someone is at a workstation. Thirty minutes after the person leaves, the smart strip powers down. Electricity is restored when it senses the person has returned.

Through the Energy Efficiency Partnership, Southern California Edison is covering the cost of the smart power strips (about $48 each) and installation. In a few months, the company will perform follow-up checks and audit the program¿s effectiveness. CSU Fullerton and CSU Long Beach are also participating in the partnership.

¿I think it¿s a win-win for everybody,¿ says George Lwin, manager of energy services. ¿For every 1,000 smart strips we use, we reduce our carbon output by 110 metric tons, which is like planting 2,600 trees or taking 23 cars off the road.¿ The strips are expected to save an estimated 255,000 kWh of electricity annually.

Appliances such as refrigerators and microwaves should not be plugged into the smart strip, nor should cell phone chargers or shared printers.

Several colleges and divisions, including the President¿s Office and 700 in student affairs, are signed up for the voluntary program. Faculty and staff members who are interested in installing the smart strip in their office are encouraged to contact their department IT manager.