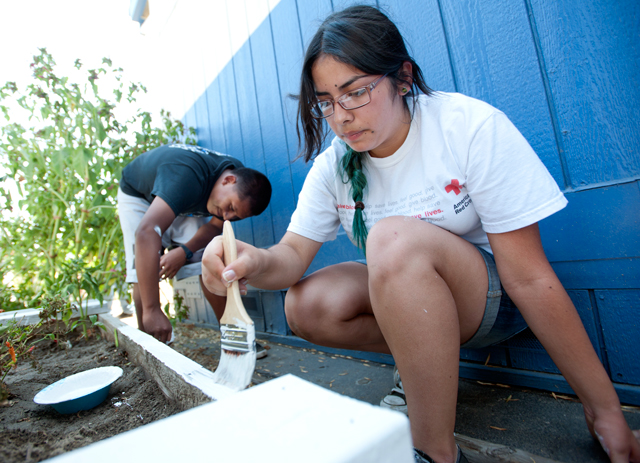 The summer sun is beating down, shade is sparse, and much work remains to be done, but the three dozen high school students restoring the garden at Barfield Elementary School in Pomona are unfazed. It¿s just another step in their progression at Cal Poly Pomona¿s Upward Bound program.

¿There¿s a lot of prep work,¿ says Dominic Butler, who will be a senior this fall at Village Academy in Pomona. ¿It¿s not as easy as it looks, but it¿s definitely worth it.¿

The gardening project might appear unrelated to academic success, but looks are deceiving. Consider it prep work for life ¿ the cultivation of values, motivation and knowledge that is intrinsic to Upward Bound, a federally funded program from the U.S. Department of Education that nurtures the futures of low-income, first-generation students from five local high schools. During the five-week summer session, one of four that Cal Poly Pomona runs, the students live on campus and study subjects to better prepare them for the upcoming academic year. They also learn to navigate the college application process and to start thinking concretely about life after high school.

And then there¿s the community service project, known this year as ¿Barfield Beautification.¿

¿We have to lift as we climb,¿ says Ricardo Quintero, executive director of Upward Bound, explaining that one of the program¿s goals is to develop a sense of community outreach and support.

Erik Ruiz, one of the few students involved in the project who professes knowledge of gardening, agrees. 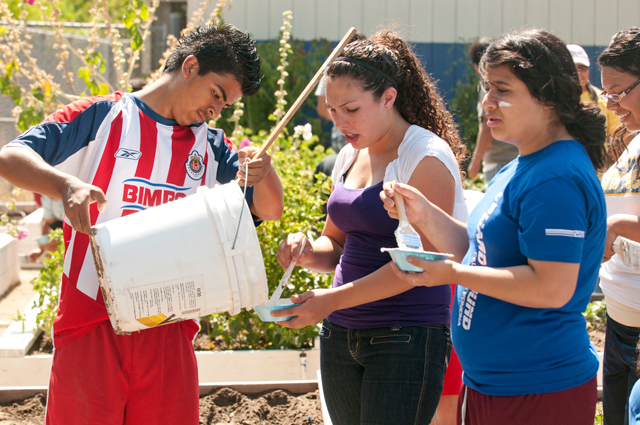 ¿Our generation is often portrayed as lazy. By doing this, we¿re showing the next generation that you have to work to succeed,¿ says Ruiz, who will be a senior this fall at Montclair High School.

Ruiz and the others in the program are selected from among scores of applicants, but star students do not have a leg up.

¿We focus on the middle-of-the-road student,¿ says Quintero, who has led the program at Cal Poly Pomona since its inception in 1995. ¿It¿s a really competitive process, and applications far exceed openings.¿

Rather than cherry-pick students with the highest grade-point averages, Upward Bound seeks those with decent GPAs ¿ 2.5 to 3.5 ¿ and a desire to succeed. Ninth-graders from Pomona, Montclair and Ontario are eligible for the summer session. Those who are admitted commit to a 10-year relationship, starting in high school and extending through six years of higher education. Every student who participates in the program gains admission to college (primarily four-year schools), and nearly half graduate, Quintero says. One is close to earning a doctorate.

A big part of the experience involves developing a concrete plan for college. Anissa Garcia, who attends Village Academy, wants to become a pediatrician. She says she is aiming to attend Rutgers University, ¿because they have a really good joint program with Drexel, and with [Upward Bound] and my family behind me, I know I can do it.¿

Ruiz says he had lofty goals but little else before joining Upward Bound.

¿I wanted to become a doctor, but I didn¿t know anything about college,¿ he says. His plans have since crystallized, and he¿s intent on becoming a cardiovascular surgeon. He credits his experiences in Upward Bound. ¿It¿s not just the academics,¿ he says. ¿It¿s the support I get.¿

Dominic Butler, who will be a senior this fall at Village Academy, says the time he spent in Upward Bound during the summer after his sophomore year proved pivotal.

¿I could see that I had put all my effort into it, and I could see how far I had come. I was keeping up and getting my homework done. I said to myself, ¿I can do this.¿¿

Butler, Garcia and Ruiz agree that the bonding that takes place over four years in Upward Bound is significant, and the mutual support and camaraderie help overcome the anxiety of living and learning on a college campus.

¿I¿ve seen what a family this is,¿ says Butler, who wants to study architecture and has his sights set on Cal Poly Pomona or Columbia University. ¿We grew up together in Upward Bound. We survived Upward Bound together.¿