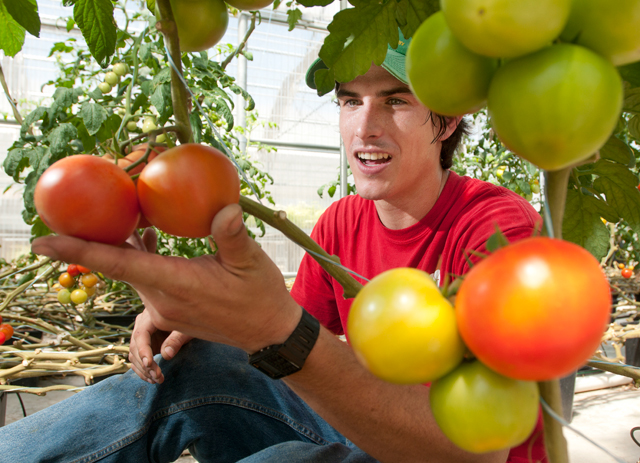 The AGRIscapes greenhouse, one of the few places that produce perennially fresh tomatoes and crisp lettuce, will expand its hydroponics operation. Beginning this summer, tomato production will increase from 150 plants to 600, and lettuce will grow from 1,800 heads to more than 2,500.

Vine-ripened tomatoes are always popular at the Farm Store, says store manager Dawn Taccone. Also, many customers are intrigued by the hydroponic lettuce, whose roots are still attached and sit in a shallow bed of water.

¿Customers really like that they can put it in water and it stays fresh,¿ Taccone says. ¿People at the Irvine farmer¿s market just love it.¿

Hydroponic greenhouse agriculture, which involves growing plants without soil, requires less water and fertilizer and yields larger harvests. Often, the plants have extended seasons and produce multiple harvests in a year. The method cycles nutrient-rich water over the plant roots, which grow in non-soil materials such as processed coconut husks, sand, rocks or gravel.

Part learning laboratory and part research space, the 4,200-square-foot hydroponic greenhouse at AGRIscapes also grows bell peppers, cilantro, basil and watercress. Earlier this year it also began cultivating ghost peppers, which are some of the hottest in the world.

Kirk Weatherton, a plant sciences student who helps maintain the greenhouse farm, says hydroponics require higher start-up and labor costs compared with traditional agriculture, but the payoffs are worth the effort. Trained along a trellis that climbs vertically and horizontally, the tomato vines can grow nearly 40 feet long and are active for nine to 12 months.