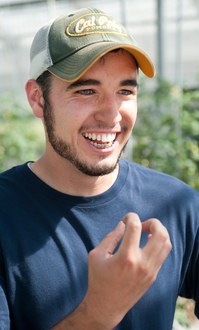 It’ll bring tears to your eyes, clear your head and nearly burn a hole in your stomach. The ghost pepper, also known as bhut jolokia, is one of the world’s hottest peppers, and they’re growing in the hydroponics greenhouse at Cal Poly Pomona.

Originally from India, the small, flaming red fruit packs a powerful punch, averaging just over 1 million Scoville Heat Units. In comparison, habanero peppers register at about 200,000 Scoville units and jalapenos at 5,500 units, according to the Chile Pepper Institute at New Mexico State University. The bhut jolokia was heralded as the world’s hottest pepper in the 2006 Guinness World Records.

“I wanted to grow the hottest pepper in the world,” says Kirk Weatherton, a plant sciences students who helps manage the hydroponics greenhouse at AGRIscapes. “It’s not worth it unless you have beads of sweat coming down.”

About an inch long and as round as a dime, the peppers are sold three for $1 at the Farm Store.

“It’s beyond hot,” Taccone says. “We put tongs in the basket so people don’t even touch them with their hands.”

At the Farm Store, the basket of ghost peppers is accompanied by a warning sign: “HANDLE AT YOUR OWN RISK!! NEVER touch the pepper directly with your hands. Always wash your hands after using the ghost pepper in cooking. Never serve to unsuspecting friends!!!! Not recommended for parties.”

Ernesto Saucedo, a Farm Store employee and business student, says he and a friend cut a pepper in half and each took a bite of the raw fruit. 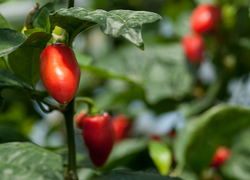 “Within a minute, my eyes watered up and I felt a burning feeling down my throat to my stomach,” Saucedo says. “The most discomfort I felt was on my tongue, and the only way to stop it was to eat cheese or ice. If anyone ever asked me to do that again, I would say, ‘How much am I getting paid?’ and “Let me see the money.'”

Alfredo Del Real, a plant science student who also works in the hydroponics greenhouse, says the pepper tastes like a habanero or any other hot pepper. The difference, he says, is the heat.

To make his point, Del Real pops a pepper in his mouth. For a few breaths, he feels fine. Then the heat starts to kick in, and he bends down to catch his breath.