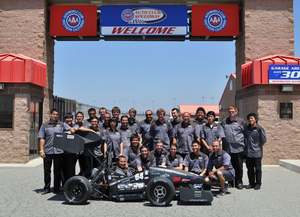 While some schools with larger budgets export a large amount of the car’s construction to outside companies, the Cal Poly Pomona team builds about 90 percent of the car in the Engineering Projects Facility in Building 17.

“They take the project from conception to completion,” Stover says. “They are getting experience they don’t get in the classroom.”

This heavy involvement in the success of the car leads to increased accountability, according to Chris Rossi, a fourth-year mechanical engineer major.

“Any mistake you make you have to deal with later on,” Rossi says. “It’s a pretty steep learning curve.” 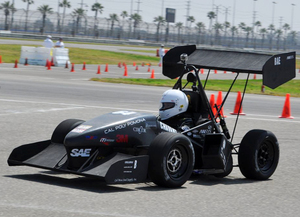 During the competition, the team made changes on the go, adjusting the car based on its performance in the challenges. The car was difficult to steer during the autocross event, so the team came up with a clever solution.

“The outboard spherical bearings were very tight, so we heated them up to melt out the liner between them and the steel housing,” Stover says. “It doesn’t last as long that way, but we only needed it to last a while.”

Stover explains that winning is only a secondary goal for him.

“It’s about the students learning, more than anything,” he says. “Cal Poly Pomona is known for its hands-on learning, and this is the main showcase for that in engineering.”