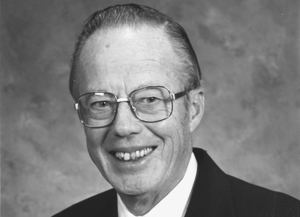 Eugene “Gene” K. Keating, professor emeritus and former chair of the animal & veterinary science department, died May 8 in Spokane Valley, Wash. He was 83.

Keating taught at Cal Poly Pomona for 34 years and chaired the department from 1971 to 1978. He was the advisor to the Cal Poly rodeo team for many years, traveling to competitions across the western United States.

In addition, he served as director of the West Coast Region of the National Intercollegiate Rodeo Association and helped found and served as president of the Kellogg-Voorhis Chapter of Gamma Sigma Delta Honor Society.

Keating was born in raised in Liberal, Kan., and enlisted in the Air Force, serving as a radioman. He received his bachelor’s and master’s degrees from Kansas State University and earned his doctoral degree from the University of Arizona.

Keating retired from the university in 1998 and moved to Veradale, Wash., in 2006. He is survived by his wife, Iris; two children, Denise Schnagl and Kim Keating; and three grandchildren.