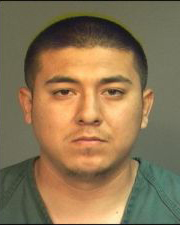 Cal Poly Pomona University Police are assisting the Santa Ana Police Department in its investigation of a 24-year-old man suspected of videotaping men using the bathroom.

The suspect is Miguel Fabian (pictured), an engineering student who was arrested Friday after being caught by an alleged victim in Santa Ana.

Investigators say they have found 64 video clips on the suspect’s phone. At this time, campus police are investigating the circumstances surrounding one clip, which is believed to have been filmed in the Cal Poly Pomona University Library. The bulk of the clips were likely filmed in Orange County, where the suspect lived and worked.