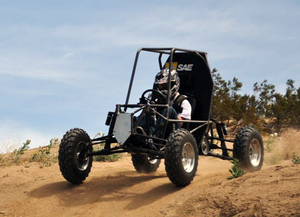 “We generally do very well because we have good hands-on engineering students,” says Clifford Stover, the mechanical engineering professor who oversees the program. “You can throw as much money as you want at a project, but if you don’t have good engineers you’re not going to come up with something that’s competitive.”

Stover says the event was not just a race but a collegiate design competition. “The students build a prototype off-road vehicle for sale to a fictitious business firm. That’s the concept of the competition.”

The Society of Automotive Engineers competition lasts four days, from May 26 to May 29, testing students in multiple categories of design and performance including presentation, maneuverability and top-speed acceleration.

Cal Poly Pomona’s 15-member team built the car from scratch, with the exception of the engine and wheels, with the goal of outperforming cars created by college teams from around the world.

Ryan Harris, a fourth-year engineering technology student and vice president of Cal Poly Pomona’s SAE team, was one of two drivers for the endurance race. He says the first-place finish was especially sweet because other teams got off to a faster start at the beginning of the race.

“When you get to the end of the endurance race and you see that you are the No. 1 team and other teams are right behind you, it’s a good feeling,” Harris says.

The course was littered with obstacles including mud, hills and wooden road ties that Harris and co-driver, Stephen Clark, had to overcome. Of the 103 cars that started the race, only about three dozen finished.

“I was just trying to stay focused, be consistent and avoid the other drivers because their cars were slower than ours,” says Clark, a second-year mechanical engineering student. The Cal Poly Pomona vehicle, which weighed 430 pounds before the race, was caked with 100 pounds of mud before crossing the finish line.

Cal Poly Pomona’s victory in the endurance event propelled it from eighth to fourth. The team received the Honda R&D award and other awards from Briggs & Stratton, and SAE.