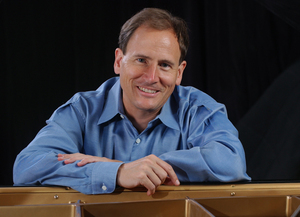 What is “Vox Pop” and how does it relate to popular music?

Pianist David Korevaar will answer those questions during his “Vox Pop” recital and master class on Friday, May 27.

Korevaar, an accomplished pianist, has performed in the United States, Australia, Europe and Asia as a soloist and chamber musician. His wide range of musical interest is reflected in his repertoire, from works by Bach and romantic virtuoso music to numerous contemporary compositions.

Korevaar describes “vox pop” as a piano medley of popular music from different eras and lands. The evening recital program includes music by Mozart, Liszt, and Earl Wild, Korevaar’s longtime mentor who has since passed away.

“I had always wanted to play Earl’s improvisations on ‘Someone to Watch Over Me,’ and this gave me the impetus to finally learn the piece,” Korevaar says. “Thinking about including it on my regular recital programs this year, I decided to use the appropriation of “popular” music as a link between pieces.”

The use of current and past popular music creates a unique blend.

“The resulting program uses found material, originally ‘popular’ in nature, in a number of different ways — as material for variation, as material to give a spicy, exotic flavor and to provide the fodder for virtuosic display of both compositional and performance technique, and as the basis for the development of a composer’s musical language based on his own national style,” Korevaar says.

Korevaar earned his bachelor’s, master’s and doctor of musical arts degrees from the Juilliard School. He currently is an associate professor of piano at the University of Colorado and frequently participates in the university’s Pendulum New Music concert series.

The free master class will be at noon in the Music Recital Hall, and the recital is at 8 p.m. in the same location. Recital tickets are $15 for general admission, $10 for students and $7 for student subscribers. To buy tickets online, go to https://cpp.edu.tix.com.