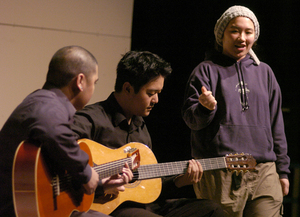 Performing original songs can be stressing, therapeutic or just plain fun. The music department’s annual “Songwriter Showcase” gives students just that experience to write original music and perform it for an audience.

Music major Kyle Neal says his song “Ghosts of Jesus” was inspired by the experience of a close family friend who was coping with a terminal illness.

“Naturally, my thoughts revolved around the idea of death, what it was and what it meant,” Neal says. “I became obsessed. This placed within the context of spending my early life very involved in the church gave birth to ‘Ghosts of Jesus.'”

The 8th Songwriter Showcase on May 19 & 20 will feature Neal and several other students who will perform their original pieces.

The upcoming showcase will be Neal’s second appearance. He says he loves to perform and explore new collaborations with his peers.

“Songwriter showcase gives me the opportunity not only to present my music to the Cal Poly Pomona student body, but it also gives me a chance to work with people in the department I never would have worked with before,” he says.

The performance allows students to explore their musical talents and perfect their songwriting skills in a welcoming environment.

“This event gives a student 10 weeks to work with a band and a producer to make their song the best it can possibly be,” Neal says. “This is an opportunity that isn’t given to many musicians at this point of their development. Keeping events like this around gives students the confidence and experience they need to succeed.”

“Ghosts of Jesus” can be downloaded at http://kylemichaelneal.bandcamp.com/.

Music Professor Arthur Winer will direct the 8th Songwriter Showcase, which begins at 8 p.m. in the Music Recital Hall. Tickets are $15 for general admission, $10 for students and $7 for student subscribers. Tickets can be bought online at http://csupomona.tix.com, and tickets bought at the door may be paid only with cash.