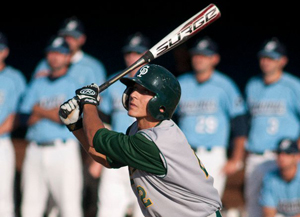 The Cal Poly Pomona baseball team suffered an 8-5 loss to Sonoma State Sunday in the West Region title game, as the result ended a remarkable and record-setting season for the Broncos.

The Seawolves of SSU advance to the NCAA Division II College World Series, held in Cary, N.C., from May 28 to June 4. SSU challenges No. 1-ranked Grand Valley State next Sunday at 10 a.m.

To open Sunday’s contest, the Seawolves rallied for a run in the first on an Alex Todd triple that scored O’Koyea Dickson.

The Broncos came right back in the top of the second to score twice, thanks in part to three-straight SSU errors. Humberto Tovalin and Stephen Gonzalez crossed home in the rally.

The third of the five lead chances in Sunday’s game arrived in the bottom of the fifth, as the Seawolves tacked on three unearned runs to take a 4-2 advantage. Cameron Cook and Steven Filippi placed back-to-back hits into the outfield, before an error on Tovalin helped SSU extend its rally. Todd capped off the frame with a double down the leftfield line. 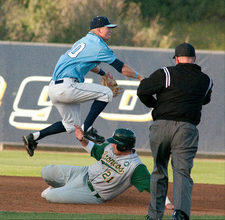 Junior right-handed starter Jake Reed finished his outing with 5.2 innings, scattering six hits and striking out six. He allowed four runs but just one was earned.

The Broncos’ offense certainly wasn’t done, as CPP rallied for in the top of the seventh while finally breaking through against Seawolves’ reliever Brian Bordagary. Junior first baseman Chris Miller opened that frame with a solo shot over the leftfield fence and Tovalin tacked on two more with a two-run homerun that scored himself and Joseph Eusebio.

The 5-4 lead for CPP didn’t hold up for long though because SSU broke through for four runs in the bottom half of the seventh. The Seawolves collected six hits in the inning, with all six being singles. That put SSU up 8-5 and top SSU pitcher Kenny Arnerich closed the contest with 2.2 scoreless innings.

Five Broncos earned a spot on the All-Tournament Team, which is listed below. Gonzalez and Allen Rodarte finished with two hits apiece Sunday.

Taijeron finished his record-setting two-year CPP career with a .369 average, 34 doubles, 32 homeruns, 99 runs batted in, 78 walks and a .989 fielding percentage. After matching his single-season program record with 16 homeruns in 2011, he stands at second all-time with his career mark of 32. 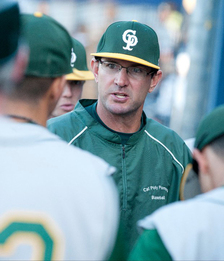 (Top photo: Ryan Goodman at bat in the Broncos loss to Sonoma State on May 20. Middle photo: Jensen Torres gets forced out at second. Bottom photo: Head Coach Randy Betten.)