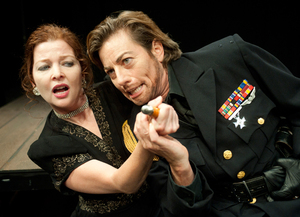 Manipulative and vicious, Shakespeare’s “Richard III” stops at nothing to seize power and the throne — marrying the widow of a prince he murdered, killing his wife, executing his older brother and ordering the deaths of his young nephews. Director and lead actor Lisa Wolpe promises a swift, passionate performance about politics and power – and really crazy people.

“It will be a fast, vicious, murderous journey,” Wolpe says. “I hope it will retain a good deal of Shakespeare’s gleeful poetry as we hurtle along with Richard on his psychotic vision of world domination.”

The seventh season of the Southern California Shakespeare Festival at Cal Poly Pomona brings together 14 student actors and five professionals from the Actors’ Equity Association for the two-hour performance. Opening night and the gala reception is Saturday, Sept. 10 at 8 p.m.

“Lisa is one of the most talented people I’ve worked with,” says Bisesti, who plays Queen Elizabeth. “Her knowledge of Shakespeare is off the charts. She’s an excellent director.”

As artistic director of the Los Angeles Women’s Shakespeare Company, an all-female, multicultural theater company, Wolpe is known for cross-gender casting. Besides herself playing the title character, Michael Kachingwe (Actors’ Equity Association) plays Margaret, widow of King Henry VI. In addition, Wolpe shifts the setting from the original late 15th century to the fictitious, fascist England, between the first and second world wars. 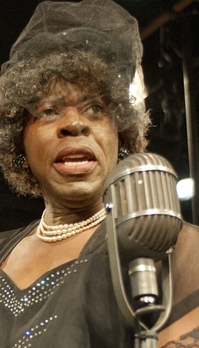 Theatre major Daniella Tarankow, who plays the Duchess of York, says students will be challenged to work in a professional environment with experienced actors. Unlike the campus productions during the academic year, the festival has fewer rehearsal dates and a longer performance schedule.

“The demands are different because on the first day of rehearsals, you’re off to work,” says Tarankow, who played Horatio in last year’s production of “Hamlet.” “There are higher standards. I like that.”

Tarankow isn’t the only veteran student in the “Richard III” cast. Robert Shields, who played Hamlet, takes on the role of Buckingham, the king’s power-hungry co-conspirator. Professional actors also include Katrinka Wolfson as Lady Anne and Jack Grigoli as Clarence.