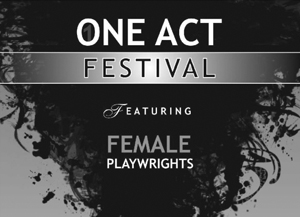 The One Act Festival, which this year features the work of seven professional female playwrights, is entering its final weekend. Shows are on May 5, 6 & 7 at 8 p.m. in Building 25, room 110.

The performances, which on average run 10 to 15 minutes, cover an array of scenarios, including a mailman struggling to make his delivery through a snowy forest, farmers battling a corporation for their land, and siblings psyching themselves up to kill a giant rat.

Laura De Lano, a theatre alumna who performs in “Containment,” about a family’s experiences while visiting Costa Rica, thinks women do not have the same opportunities as men for their work to be published. She referenced a New York Times article that cited money, unconscious bias and ignorance.

“It’s a cool thing to hone in and respect the female playwrights and the work that they do,” De Lano says.

One Act stage director Bernardo Solano says the theatre department is proud to support female playwrights by featuring their work.

“There has been a historic lack of support for female writers and playwrights specifically. It has been a male-dominated field,” Solano says. “It’s changed a lot over the last bunch of years, but there’s still more to be done. In our small way we can support female writers by doing an event like this.”

The audience will enjoy the variety of topics and styles, Solano says.

“That’s the fun of a festival of plays,” he says. “Your taste buds are stimulated in a different of ways.”

All tickets are $10. For more information about the theatre department, go to www.class.cpp.edu/th/events.html.