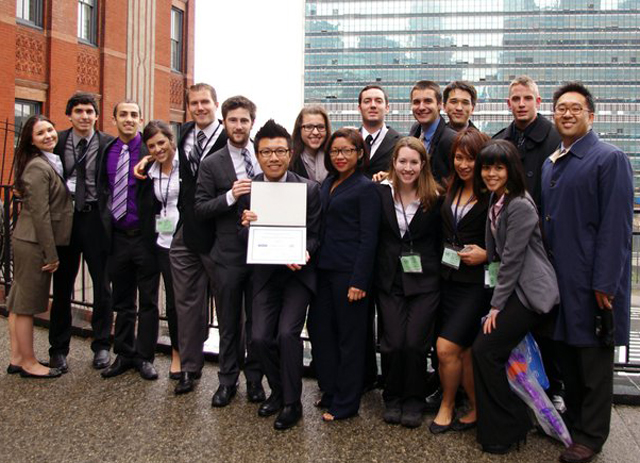 The National Model United Nations team has received the Distinguished Delegation Award for outstanding performance at the annual national conference in New York.

“When you hear your name called and you’re asked to stand in the U.N. General Assembly Hall, where all summit U.N. meetings are held, it is a proud moment,” says James Kim, political science professor and faculty advisor for team, which competed in New York in mid-April.

“To win these awards on a consistent basis is not easy,” Kim says. He explained how Cal Poly Pomona has won the distinguished delegation award seven times, an average of once every two years. The team has also won the double outstanding delegation award, the top bracket, five times.

“It is a test of your academic, intellectual and mental capabilities,” Kohorst says. “And I think at the end of the day, receiving an award is proof we passed the test.”

“Most of the people on the team are from the local area,” Kohorst says. “To interact with students from Europe and Asia definitely expands their horizons and their way of thinking, and it really allows them to test their capabilities.”

The conference simulates a U.N. meeting, and the attendees are evaluated on their performance. About 3,000 students from 300 colleges worldwide participate, each representing a U.N. member nation and various non-governmental organizations. Cal Poly Pomona, in its role as Poland, addressed three topics: ensuring the peaceful destruction of conventional weapons’ stockpiles, combating the world drug trade and preventing human trafficking.

“You really get to see how the system works,” Kohorst says. “I think there is something admirable in that, where people can really experience the intent and the broad reasoning why democracy is and how democracy works.”