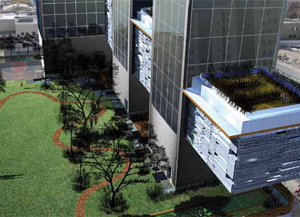 Weeks of planning, brainstorming, trial-and-error and discovery boiled down to this: a brief, intense presentation in front of experts in the subject.

The landscape architecture students had prepared for this opportunity, and they were not about to let it slip from their grasp. With notebooks, charts and other materials, they stood before a standing-room-only group of executives at the Weingart Center and shared their visions for a new facility that would serve 150 homeless veterans.

The Weingart Center, a nonprofit organization in the heart of L.A.’s Skid Row, is committed to providing important services to the homeless, including housing, substance abuse recovery, health care and education.

The project was an academic exercise in James Becerra’s class on “The Contemporary Urban Landscape” in which students offered insights into what the center could do if it had the resources to expand.

“There were a lot of oohs and ahs and wows” among the Weingart Center executives, recounts Joe Garcia, one of the students. “It was a great feeling.”

The words landscape architecture typically conjure up images of tree-lined neighborhoods, verdant parks and irrigated gardens, but that’s a limited perspective of the profession. An anonymous slice of property in Skid Row is every bit as much a part of the landscape. “We’re not decorative,” says Becerra, a 1999 landscape architecture graduate. “We design. We work in three-dimensional space.”

The project involved turning a parking lot near the 11-story Weingart Center into a facility that serves veterans. It involved not only giving each veteran 400 square feet of living space, but also providing for their emotional and physical well being.

Before sketching a single image on their 3-D modeling programs, students read case studies about the homeless and they toured the Weingart Center to better understand its clients’ needs. Several made return trips to the area.

“It became personal,” says Jonathan Stalvey, a classmate of Garcia’s. “We wanted to do good work, and not for just the grade” — a sentiment seconded by Garrett Reger, who was Garcia’s partner on the project.

“One of the biggest realizations was that even though it’s on Skid Row, it’s close to some really nice areas,” Reger says. “We wanted to make it feel like it’s part of downtown, not some walled-off area.”

Designing the project proved to be a challenge — and a passion — that consumed evenings and weekends. The 19 students found that, like turning a Rubik’s cube, every design element they added affected the rest of the site.

Street parking or underground parking? A basketball court or a running track? How much commercial and retail space, where veterans could develop their work skills and interact with the surrounding community? And don’t forget elevators, hallways, custodial space and access for the disabled — and then there were the aesthetics.

“We really wanted some unique views,” Stalvey says. “We wanted to connect the vets with the community.”

The students, dressed for their business proposals, arrived at the Weingart Center the evening of March 15.

“I’ve lived with this project for 10 weeks, and they’re going to see it for 10 minutes,” Reger says. “How do you convey what you’ve done?”

Excellent speaking and presentation are critically important, Becerra says, which is why he requires his class to practice those skills throughout the quarter. “You could have a fantastic project, but if you can’t express it to your audience, you’ve failed.”

The students passed with flying colors.