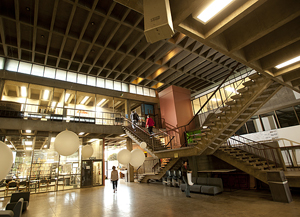 The College of Environmental Design has received a $100,000 grant to address social and environmental sustainability issues through the newly created California Center for Land and Water Stewardship (CCLAWS). The CLASS Fund grant provides critical startup funds for the interdisciplinary center, which aims to bring together faculty and students from throughout campus, as well as a wide range of stakeholders in land and water conservation.

“These are the critical issues of our time,” says Julianna Delgado, professor of urban and regional planning and the center’s co-director. “From the time California began to develop, it was water and land that made us prosperous. If we don’t manage that, then what’s going to happen?”

The center, which Delgado and landscape architecture Professor Susan Mulley established in 2010, will sponsor collaborative research projects primarily in Southern California. It also plans to offer public outreach workshops, develop a certificate program in sustainability, and create a GIS database with land and water information. Some of the center’s early undertakings may include research into the history of water use in the area and the creation of a modeling system of the region’s water supply.

Cardoza, CLASS Fund co-founder and scholarship chair, says that collaboration is critical in order for sustainability issues to reach a much broader base and make a lasting impact. He believes that Cal Poly Pomona’s track record proves it is well-positioned to bring together planners, designers, artists, agriculture, government officials, community residents, engineers, civic leaders and businesses.

“Awareness for environmental interests and concerns has grown much beyond the focuses of our individual professionals,” Cardoza says. “We want to encourage a program, a university that will take on a leadership role in pulling the green industry at large together.

“I’m a supporter of Cal Poly Pomona to take on this leadership role. The need is now. It’s time for action now.”

The creation of CCLAWS was inspired by the Golden Necklace Project, a collaborative vision for a multi-use trailway and open space system that would extend from the San Gabriel Mountains to the Pacific Ocean. In 2008, Delgado’s undergraduate and graduate students teamed with Mulley’s graduate students to develop a master plan for the trailway and open space. With feedback and support from a diverse group of stakeholders, the project is a model for future endeavors CCLAWS hopes to accomplish and sustain.